Parent guests helped Kim Davis’ Kindergarten A class celebrate Lunar New Year, the Year of the Ox, and to understand the origins and meanings of the holiday’s traditions.

Lunar New Year focuses on starting the year fresh and clean. The date of the holiday varies from year to year, beginning on the new moon between Jan 21 and Feb. 20. It goes from New Year’s Eve through to the Lantern Festival. Lunar New Year, Chinese Chunjie, Vietnamese Tết, Korean Solnal, Tibetan Losar, and Spring Festival are all festivals that begin with the first new moon of the lunar calendar and end on the first full moon of the lunar calendar, 15 days later.

Chinese holidays highlight family and ancestors, being together, eating together, sharing chores, visiting family, gifts to younger members of the family, and starting a clean slate.

Lunar New Year is celebrated all over  the world especially with food. Slides in the presentation told a little about each country’s traditions:

Korea (Saying: Saehae Bok Manee Badesaeyo): Traditionally, the Korean Lunar New Year is all about family and paying respect to their ancestors. Traditional games are played and money is gifted to children. Similar to that of the Chinese, tteokguk is a Korean rice cake soup where the rice cake resembles old style Korean currency, symbolizing wealth and prosperity. There is also manduguk, Korean dumpling soup, where the dumplings are considered “money dumplings.”

Philippines (Saying: Kung Hei Fat Choi) : The Lunar New Year that is celebrated in the Philippines takes after the southern part of China, where most Chinese immigrants in the country are from. Sweet rice cakes, tikoy, are eaten in varieties such as chocolate or ube (purple yam). Hopia, a Chinese-Filipino mung bean pastry, are also served as a symbol of good fortune. Filipinos like to pay off their debts at this time to start fresh for the New Year.

Singapore (Saying: Gong Xi Fa Cai): Sweet treats, such as rice cakes and pineapple tarts, are given out, as well as any sort of souvenir inscribed with the character “fu,” which means good luck. Most Chinese restaurants in Singapore will serve yusheng, a traditional Chinese salad prepared with raw fish, shredded vegetables, sweet sauces and sesame oil. Each ingredient signifies a token of wealth and prosperity, such as a fried wonton garnish, which resembles gold.

Bulalacao said that common symbols of Lunar New Year are dragons, lions, and firecrackers. She asked Ken Leung to explain why people dressed as lions visit businesses. Leung explained that this is to bring good luck to the businesses. He shared that, as a boy, he handed out the red envelopes at the bank where his mother worked. Leung said that over 70 years ago, his father lived in a rural village in south China and the children made a dragon from straw and took it house to house to bring prosperity to the people.

Bulalacao shared a brief video of a lion dance in NYC’s Chinatown.

Leung added that young married people come to visit family homes and bring dim dum and tea and have breakfast with elders to show respect.

Sharing food with family is an important part of Lunar New Year celebrations. Yifan Clarke said that her children have learned how to make dumplings very quickly and these are shared with all the relatives.

Bulalacao asked Clarke to explain the origins of the Zodiac in Lunar New Year. Each New Year is named for one of the animals of the Zodiac. This is the Year of the Ox.  February 12 marks the beginning of the Year of the Ox. The second animal of the Chinese zodiac, the ox, denotes the hard work, positivity, and honesty that will be manifested in all of us in the coming 12 months. Clarke shared a story about how an emperor invited all the animals to a feast, but only the 12 who got there first would enjoy the feast. The rat rode on the back of the ox and jumped off just as they arrived, ahead of the ox, so the rat is always first in the Zodiac calendar.

Bulalacao explained that some fruits and flowers can symbolize good luck, such as mandarin oranges. Other customs include filling the home with lucky flowers.

Bulalacao shared information about artists’ celebrations of Lunar New Year such as the Asian American Arts Alliance (A4), Museum of Chinese in America, and A4 cooking class.

In conclusion, the parents shared a New Year’s greeting:

All the children in the Lower School went home on Thursday with special treats for Lunar New Year. Each child received an tangerine and a red envelope with a New Year’s message and sticker inside. 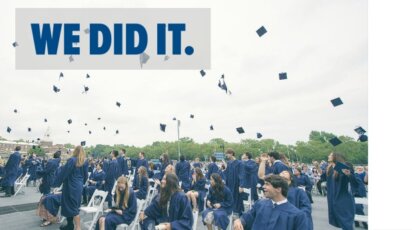 Poly Highlights from a Most Unusual Year

On campus, in pods, 6-feet apart, wearing masks, online, the Poly community rallied together and made it through the 2020-21… 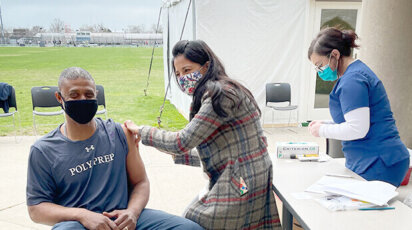 An on-site Pop-Up Pfizer Vaccine Clinic makes it easier for students ages 16+ to get a COVID vaccination. 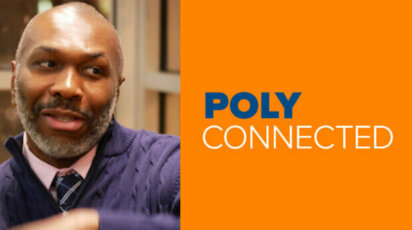