On a cold January morning, Buddhist monk Lama Tenzin Yignyen returned to Poly with an enlightening message of compassion and loving kindness. It is not the accumulation of money that brings happiness, he told Middle School students gathered in the library on Monday, but the giving of yourself to others, developing the heart as well as the mind.

Lama Tenzin has visited the Lower School and the Dyker Heights campus for many years. For the first time since January 2020 and the beginning of the pandemic, Lama Tenzin returned for a week to create a sand mandala of compassion on a table in the library, where socially distanced students came to observe his work. He explained the meaning of the symbols he used for earth, air, fire, and water and the lotus in the center of the spiritual artwork.

Each day began and ended with meditation. During the day, Upper School and Middle School classes took turns coming into the library with their teachers and sitting in a wide circle. A line of Tibetan prayer flags stretched above them. Lama Tenzin stood at one end of the circle in front of an altar with images of Buddha, a bowl of fruit, and candles. He told the students that they should develop their hearts even more importantly than developing their brains.  He emphasized that they should give up anger, jealousy, and greed.

Lama Tenzin, who was ordained a monk by the Dalai Lama in 1969, has constructed and taught about mandalas at high schools and colleges across the United States. In the center of the mandala, he begins with a lotus design and works out from there in concentric circles using 17 colored sands to fill in the outlined pattern. On Wednesday, students watched as Lama Tenzin tapped steadily on a chakpur, a metal funnel filled with yellow sand, adding a line to the design. 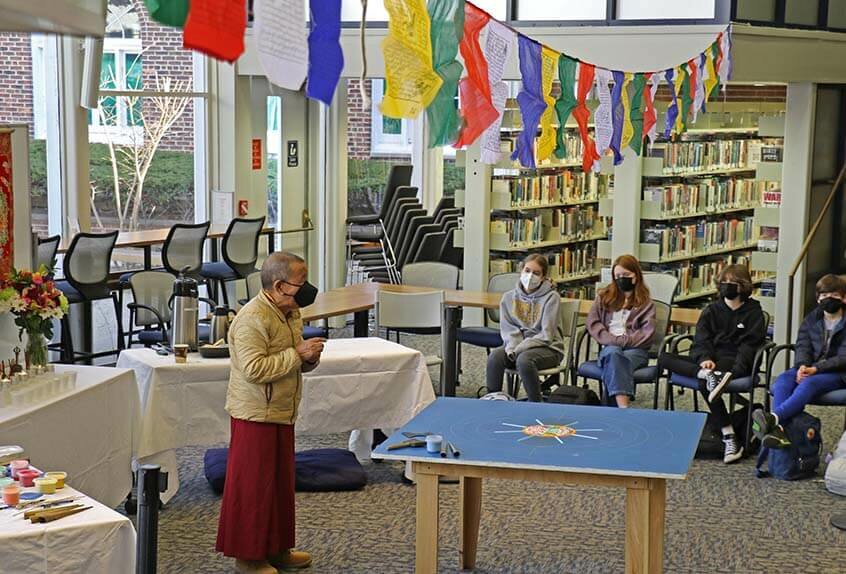 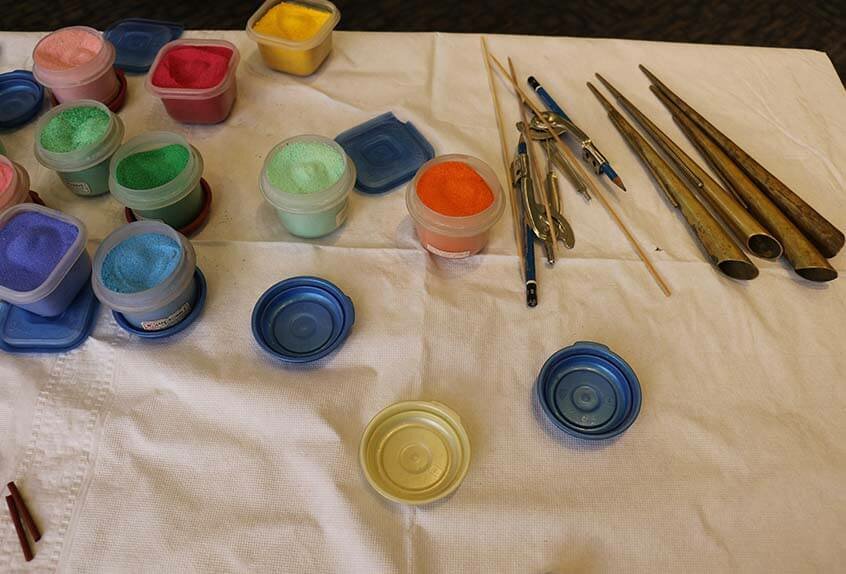 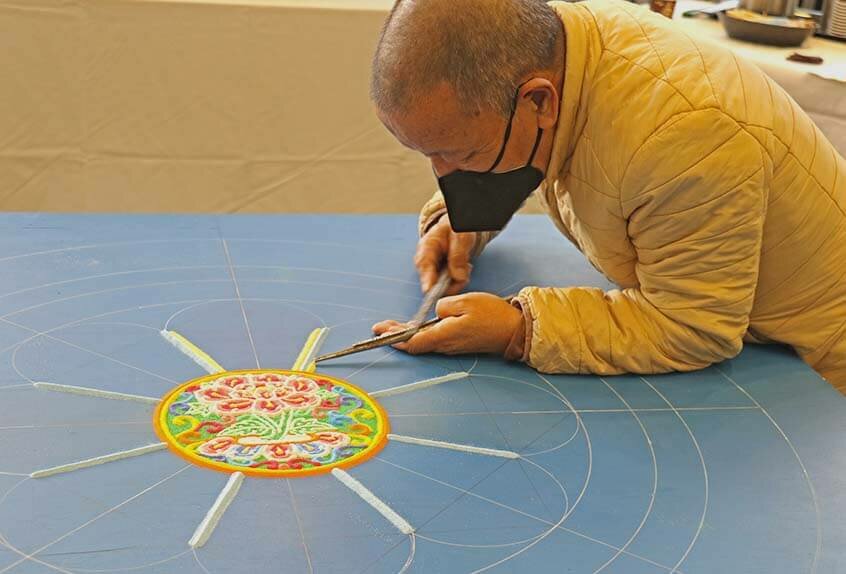 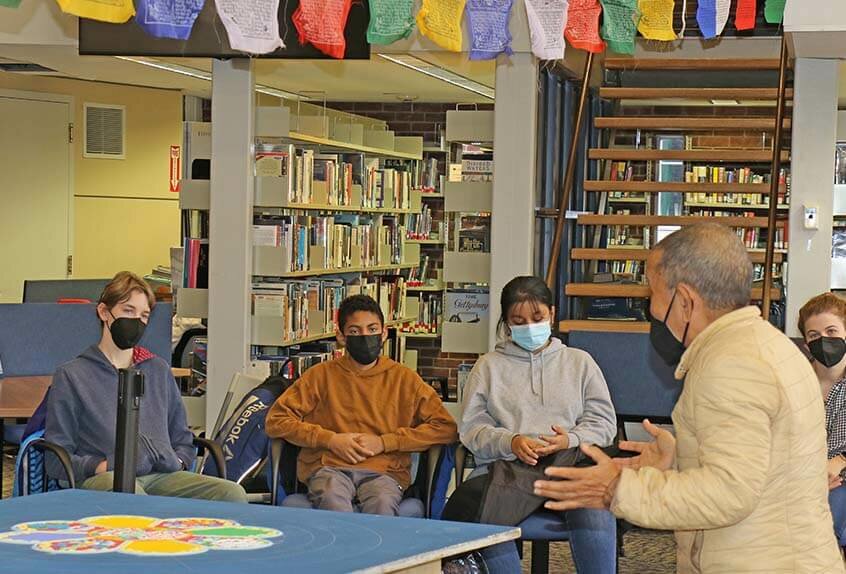 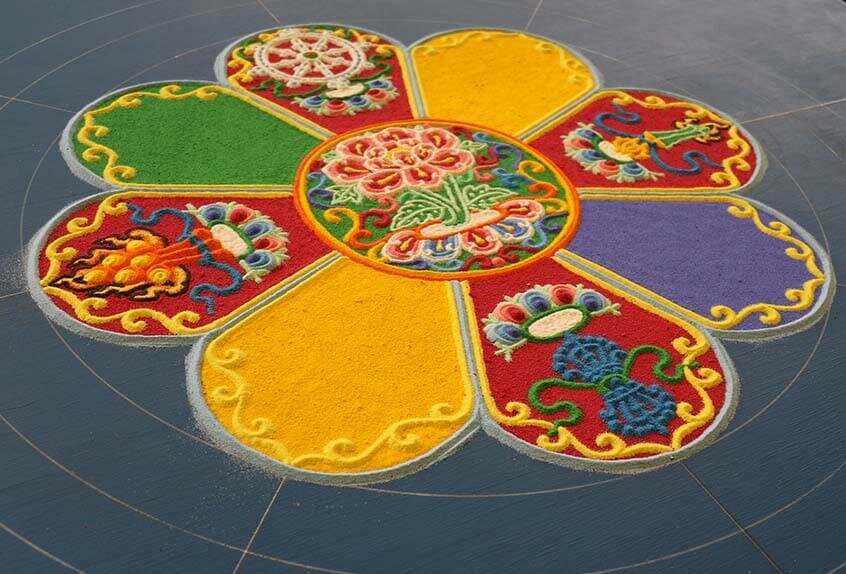 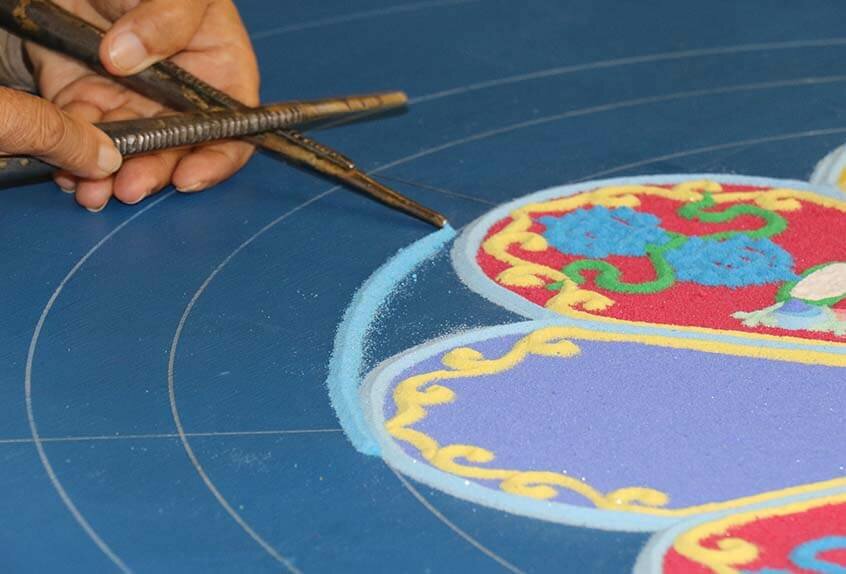 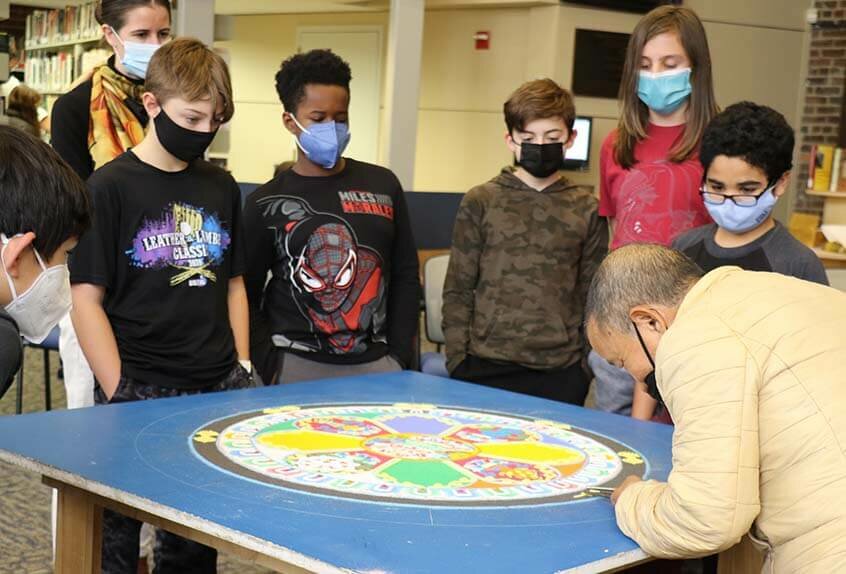 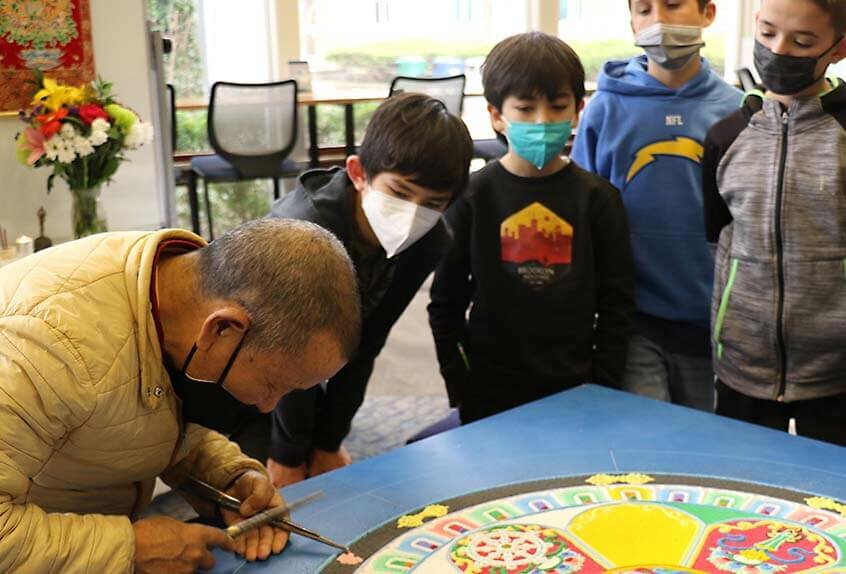 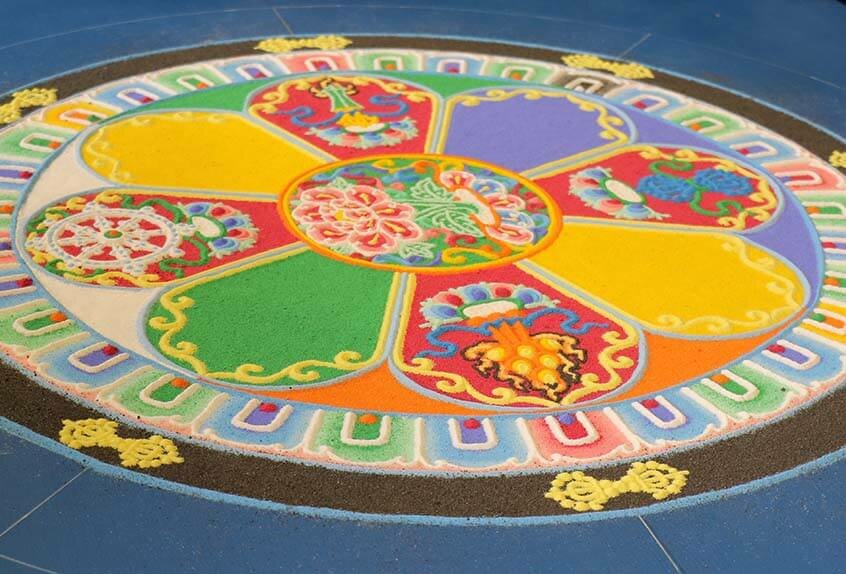 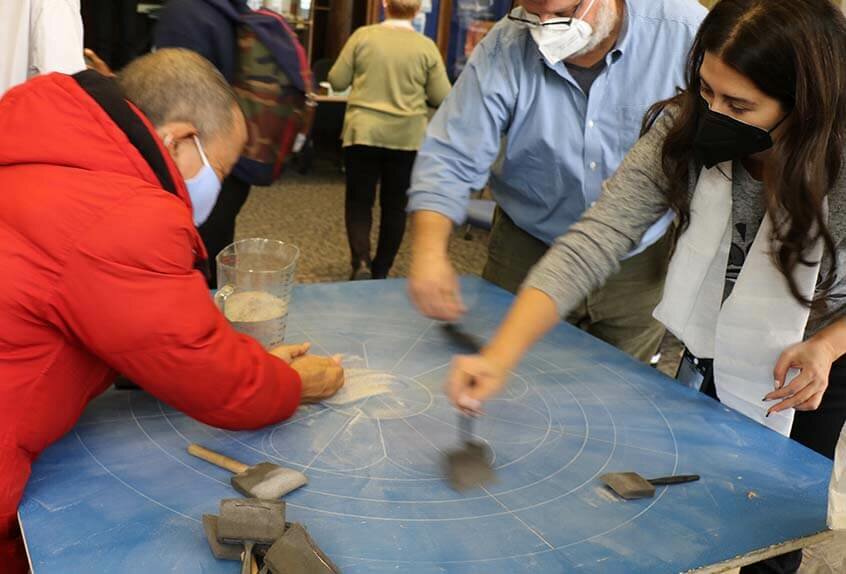 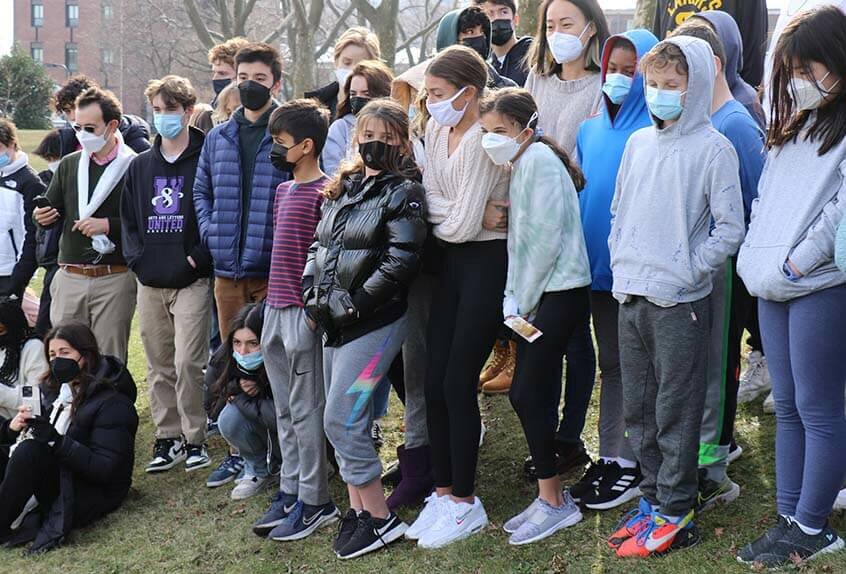 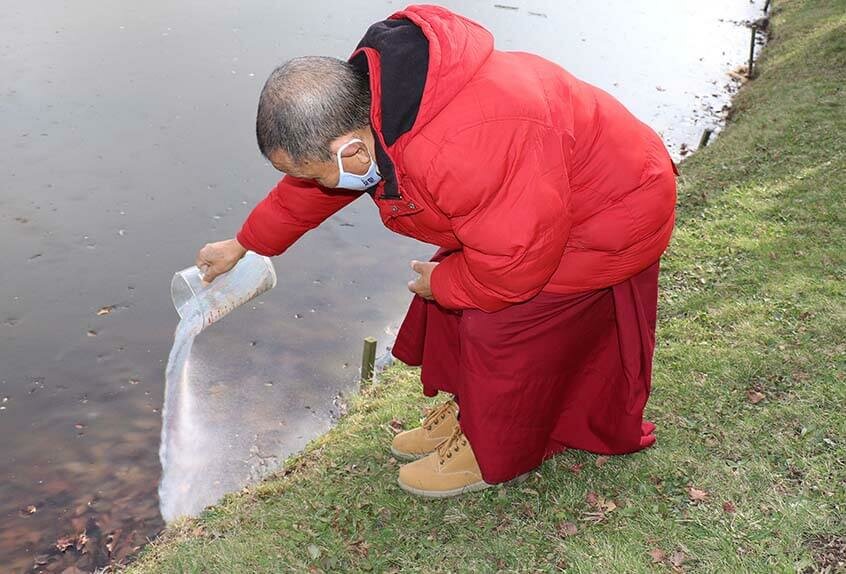 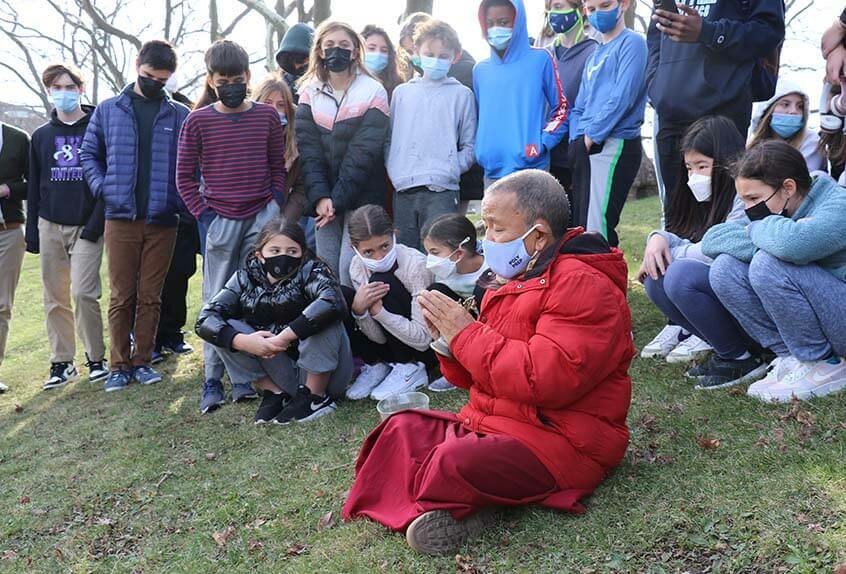 “Lama Tenzin spoke about a number of things that I personally really needed to hear,” said Hannah Smith ’22. “For example, he encouraged us to enjoy being who we are and be happy with ourselves, because we can’t be anyone else. He reminded us to take life one day at a time, and that personal growth and improvement should be a gradual process that cannot be rushed. Most importantly, he reminded us about the things that truly matter in life: kindness, compassion, and love. His words really resonated with me because, since life can be so chaotic and stressful at times, I had somewhat forgotten what life was really all about, and it was wonderful to take a step back and remember.”

“He reminded us to take life one day at a time…”

Smith’s English teacher, John Rearick, made an interesting observation. “I found that there was a wonderful connection between what we have been studying in King Lear and what Lama Tenzin was saying about the importance of compassion,” said Rearick. ”Shakespeare might have been a Buddhist!”

Smith explained, “Lama Tenzin spoke about attachment and love, and specifically the difference between the two. He said that real love is unselfish and unconditional, and if one sees love as transactional–meaning, if one only expresses love because they expect something in return–then it is not real genuine love. I thought this was really relevant to the character of King Lear, because, particularly in the beginning of the play, he views love as completely transactional: he agrees to give his daughters land as long as they profess their love to him in return. Needless to say I think Lama Tenzin would disapprove of King Lear’s interpretation of love.”

Lama Tenzin invited questions from visiting students. One student asked, “How do you deal with stress?” Lama Tenzin said that you should never get to the point of being stressed, but there are preventative measures that can be taken. He explained that through meditation we can get to know ourselves honestly and know what is true. Another student asked about the meaning of the mandala and Lama Tenzin explained that the mandala is an ancient art form that is part of Tibetan culture. He compared the mandala to Western art, explaining that, unlike a painting valued at millions of dollars that may hang in a museum, the mandala has a spiritual meaning and, at the end of the week, this artwork would be dismantled. On Friday, in a ceremony, Lama Tenzin talked about the impermanence of our lives and then had the students brush the colored sand into a pile on the table. He collected the sand in a pitcher and walked with the students to the pond where he emptied the sand into the frozen water.

Afterward, Tallulah Glancy ’25 said, “I found Lama Tenzin’s message very calming and inspirational. He told us that because we have all of these computers in today’s world, we get the easy path, but we need to choose the hard path because that’s where we learn the most and where we find the most happiness. He told us that happiness must be embraced. If somebody were to insult you, you just need to say thank you, embrace it, and let it go. I found this really inspiring because it made me realize how much we take for granted and how we are always trying to get happiness by doing things, but sometimes we just need to embrace what’s around us. His way of letting go was by building his mandala, which represented happiness, and then breaking it. He cared about it, but he knew that memories were within him.”