Update February, 2022: A new HUGs group has been established. HUGs for Jewish Families is led by parent-volunteers Julie Cohen P’29, ’34, Rose Greenbaum P’35, Dalit Paradis ’34, Jaime Pessin P’26, ’32, and Jennifer Rosen P’29, ’31 and will be an opportunity to bring together and support Poly’s Jewish community through social and service events and educational programming.

HUGs—Historically Underrepresented Groups—was formed by Poly parents to help foster unity, understanding, community, and activism in the Poly community. While Poly Prep has always supported and encouraged these goals, the formation of several groups within the community has put a laser-beam focus on them to create a sense of belonging and connection. The groups have helped amplify much-needed voices, increasing visibility for groups who have a long history of being marginalized.

The first to form was HUGs Black and Latinx in 2017. Melissa Downing, P’32, ’34, ’35, co-chair for the Lower School, explained why the group is necessary. “It is so important for non-Black and Latinx parents, students, teachers, staff, and administration to understand and be aware of our experience—particularly in this moment with the racial injustices and health disparities our communities have been experiencing.” She adds that as important as it is to have ongoing conversations about privilege and be active about anti-racism, it’s just as important to foster community “for parents of color to come together in fellowship and talk about the struggles and realities of our children which are unique to them because of the color of their skin.” Students need to know they have allies, and parents are able to be part of a united community, bringing issues and new initiatives to Poly’s administration with a unified voice to help maintain an equitable and just environment.

“When my children came to Poly in Middle School, there were limited opportunities for me to get to know other parents, especially parents of color,” said Daria Ilunga P’20 ’23, co-chair for Middle and Upper School HUGs Black and Latinx. “In February 2018, I attended a HUGs Black and Latinx social organized by Lower School parents. It was wonderful for me to be in an affinity space with parents I’d never had the opportunity to meet.”

The next group to form was HUGs LGTBQ+, whose children have a very different type of visibility struggle—the makeup of these students’ families is still often considered and described as “non-traditional.”

“Our numbers are small, but it is so special for our kids to see themselves reflected in each other and to see their families celebrated by their peers and teachers whose families don’t look like theirs,” says Liza Bennett P’33, HUGs LGTBQ+ co-founder. “We’re grateful to have been included in conversations with other HUGs leaders, faculty, and administration on how to move forward to better serve all our students.”

In the fall of 2019, HUGs API for Asian-Pacific Islanders was created. Co-founder Nancy Bulalacao P’33 articulates the need for it, especially in the context of the events of 2020. “Anti-Asian violence and bias is a very real insidious thing that has garnered a little more attention given the uptick around COVID-19 and the president using inflammatory language in his press conferences that puts the Asian-Pacific American community at higher risk,” she says. She adds that the group remains aware of prejudice against other marginalized groups at the same time, and sometimes must face complex issues that not everyone is ready to confront. “After the murder of George Floyd, HUGs API felt it was critical that we show our support to the Black community at Poly.  We felt that it was important given the inherent anti-blackness among many Asian cultures that we make a strong statement in support of the Black community and provide resources to our API community as to why it was important that we confront anti-blackness within our community head on.”

This is part of the uniqueness of HUGs; all of these groups are part of the same organization, uniting during an especially divisive time in our history. Each expressed its admiration for and gratitude to Tene Raymond P’31, ’33 and Indhira Arrington P’29, ’31 for establishing HUGs as a pillar of Poly’s diversity, equity and social justice work and for co-founding HUGs Black & Latinx. Their vision inspired efforts to build community across multiple underrepresented groups.

Established in 2022, the HUGs for Jewish Families’ mission is to share the joys of Judaism at the Lower School through support of the Jewish community and educational outreach. “Our goal is be to bring the richness of Jewish holidays and culture to the wider Poly community,” said Jen Rosen P’29, ’31, “while providing a social network for those who identify as Jewish.”

HUGs encompasses community gatherings, activism, education initiatives, inclusive events, and special programs. Parents are enthusiastic about the projects they and their children have been able to take part in at Poly Prep.

Downing says her proudest accomplishment as part of HUGs was to “collaborate with Pre-K Teacher Evelyn Gomez to have the first Hispanic Heritage Month celebration in the Lower School last year, where we decorated the school with a group of parents from every background imaginable.” They created a display featuring all of the faculty and staff in the Lower School from a Latinx/Hispanic background, assigned each grade a Latin country to study for the month, placed historical Latinx figures throughout the entire Lower School, brought in Teatro SEA, a Puerto Rican puppetry organization, to put on a play for the children, and more. The month-long celebration wrapped up with an assembly consisting of a parade of nations. “It was a lot of work,” she said, “but some of the most fun I’ve had!”

The My Story project, launched in the Lower School by Poly’s administration in collaboration with HUGs Black and Latinx, has been a big hit with students and parents alike. Its goal is to recognize and share the rich cultural identities of Poly’s students through unique profiles of their families and traditions. Students and their families from different HUGs groups created posters about their families using pictures and answering questions about their culture and heritage, with help from writing prompts like “My family is from….” “My family includes….” and “A tradition that is important to our family is…” The finished posters, showcasing diverse communities among Poly’s population, were displayed at the school for all to see and celebrate. 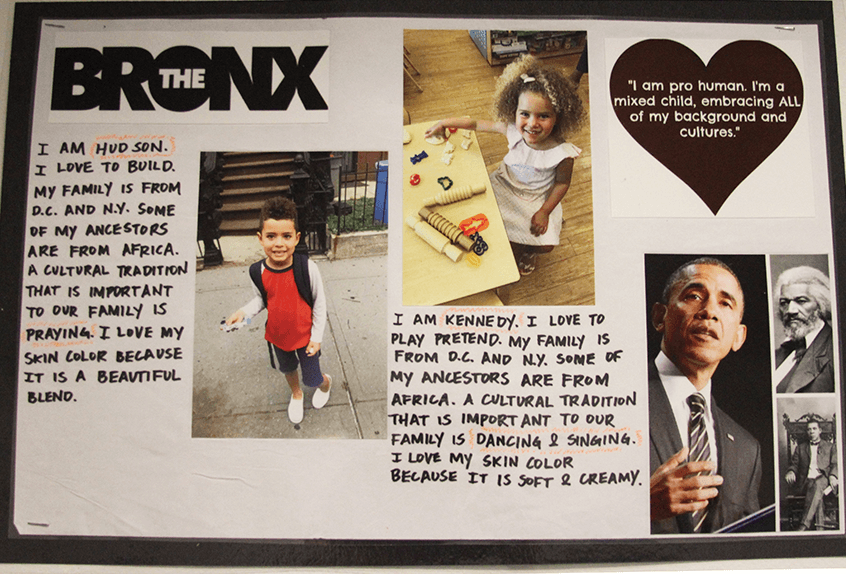 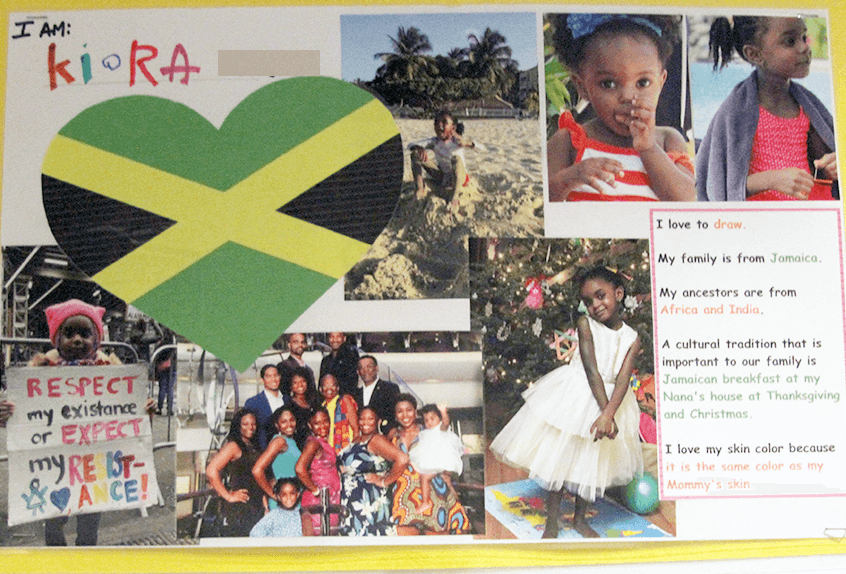 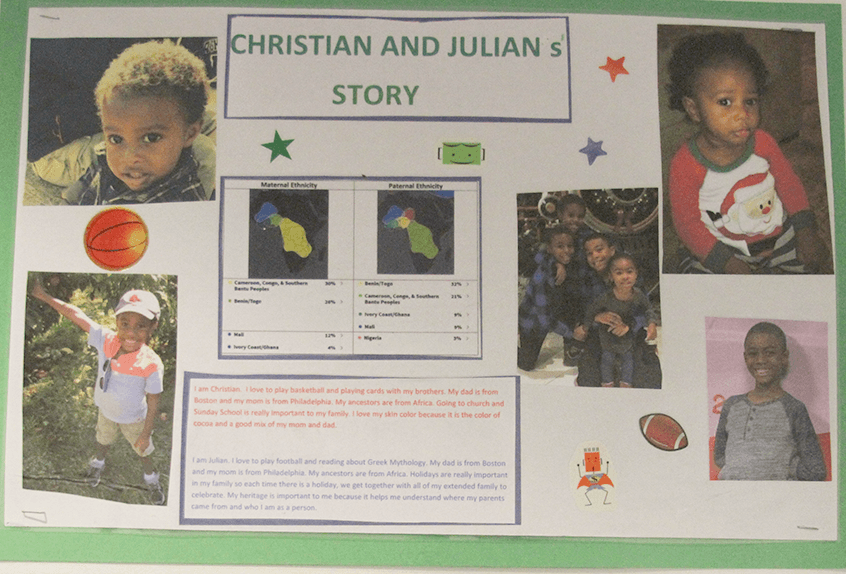 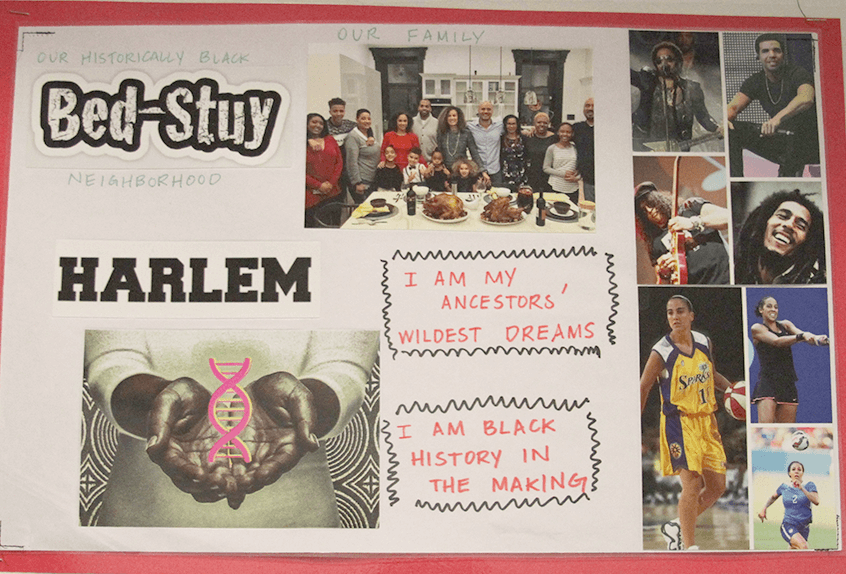 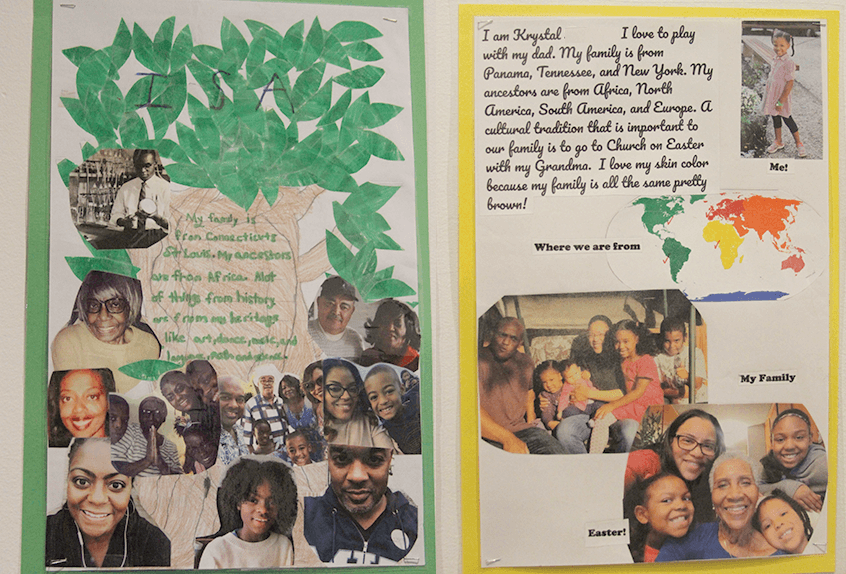 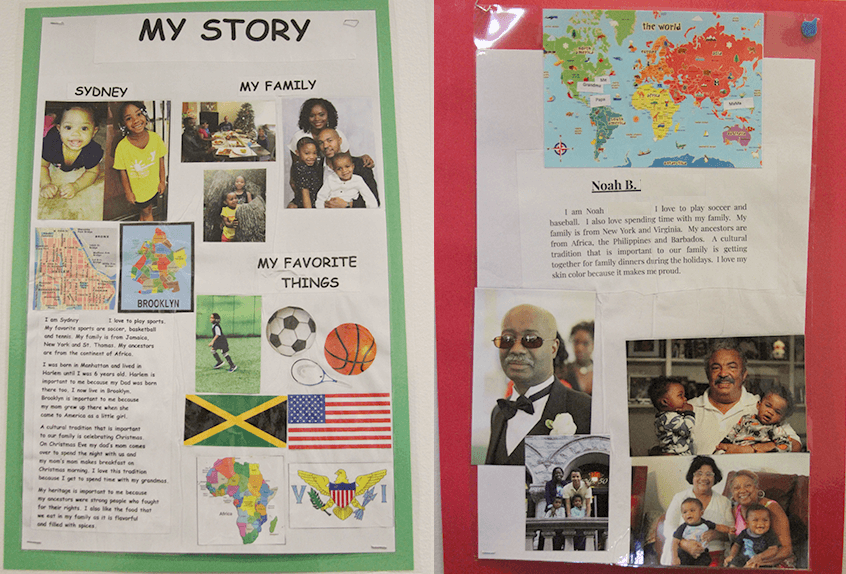 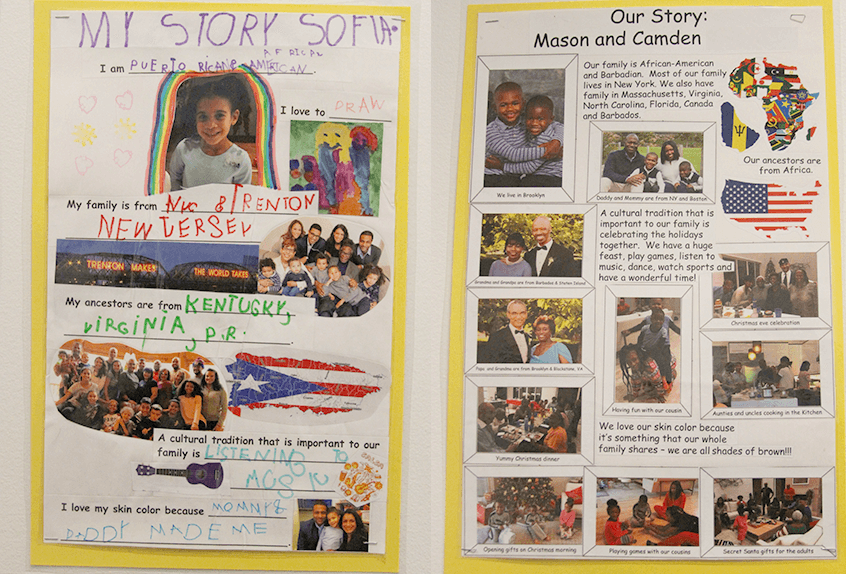 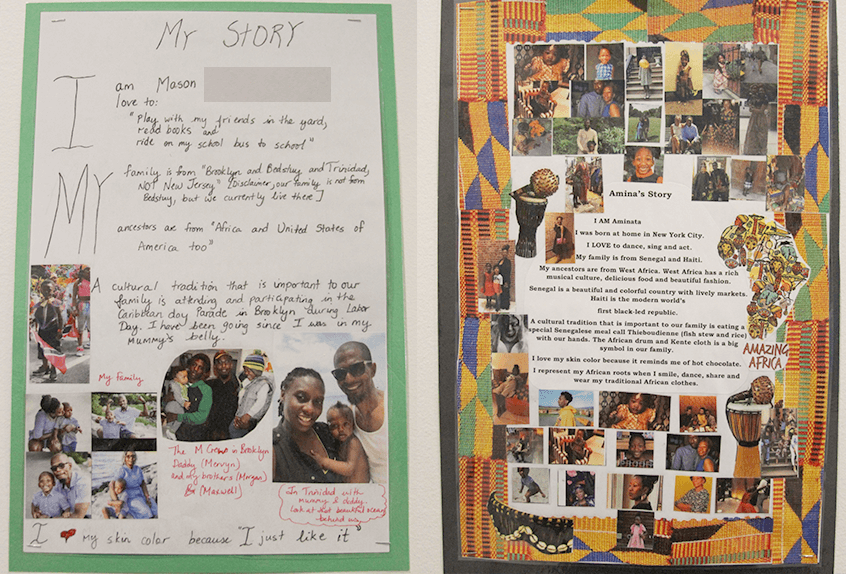 Other HUGs activities bring attention to important issues within the Poly community.

Andre Benjamin P’30, co-head of HUGs Black and Latinx for the Lower School, describes being part of an admissions panel for prospective parents, expanding the group’s reach beyond the existing Poly community. It was “positioned as a ‘real talk’ panel with no Board members and administration present,” he says, adding that it was “extremely well received by prospective parents.” Benjamin and Downing, have also partnered with Head of the Lower School Dr. Francis Yasharian to provide feedback on areas of the school’s academic and social experience which can be improved.

The LGBTQ+ group is in sync; they’ve also been advocating for representation in all admissions events and tours—and kept up the effort on the social front, hosting cocktail nights for parents, and playdates for families to attend together. For younger students, there was a Drag Queen Story Hour, as well as a “Passport to Poly” event at Lower School that had a room celebrating LGBTQ+ families where they could create their own pride flags. 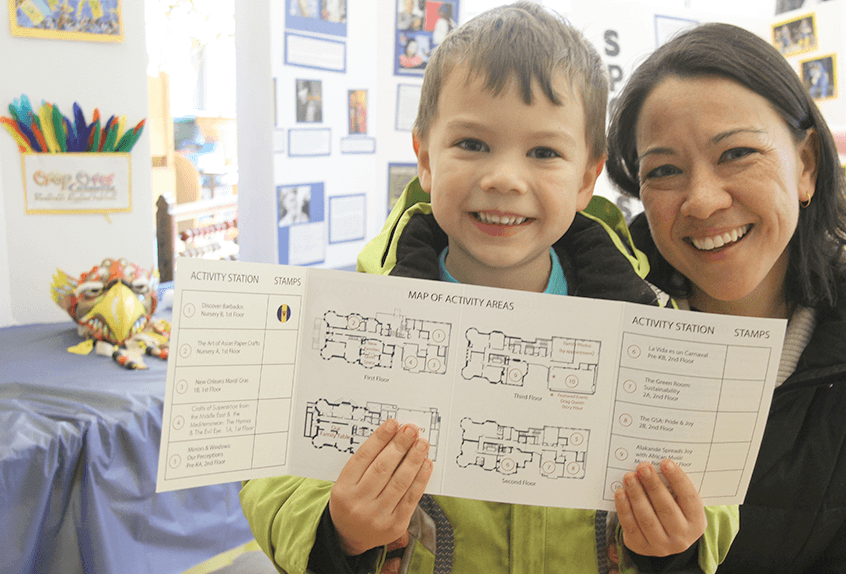 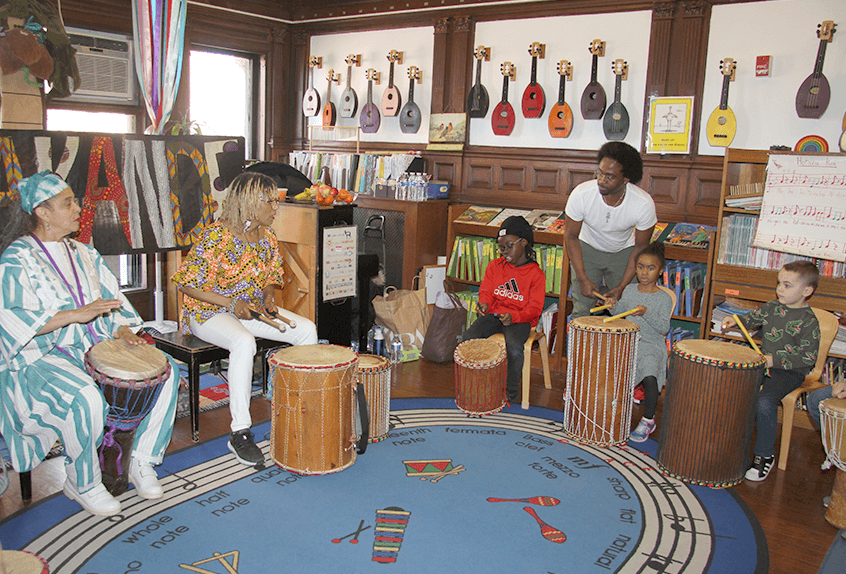 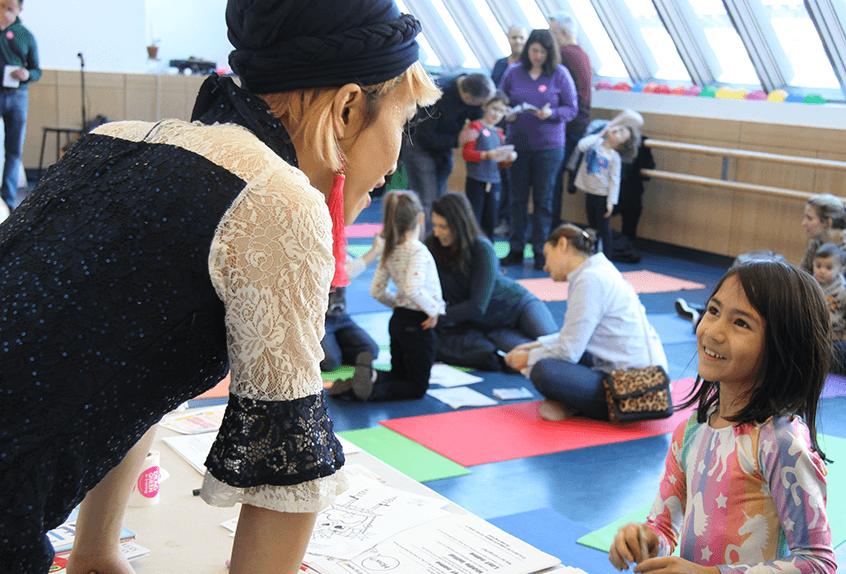 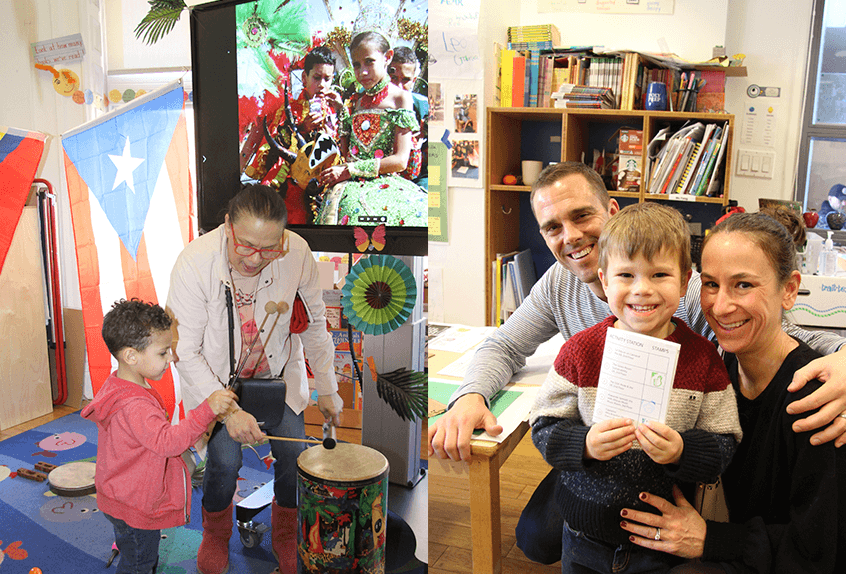 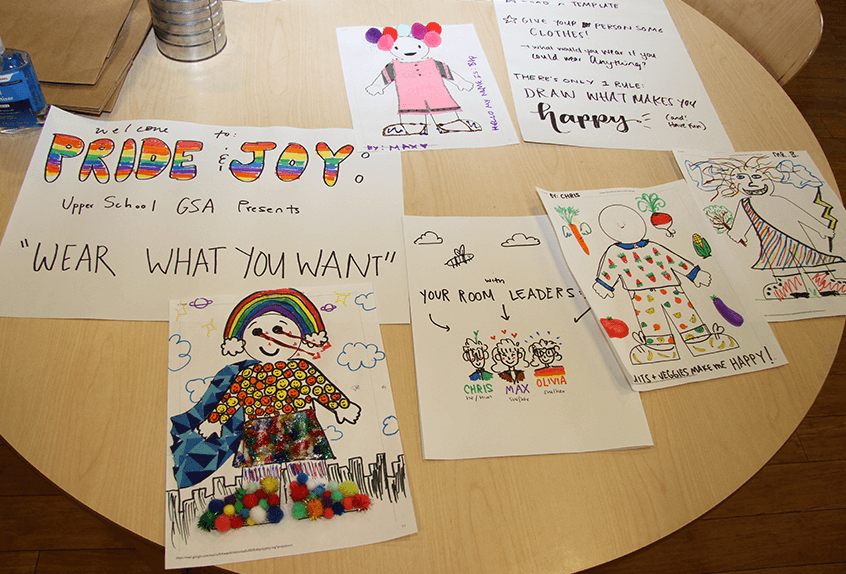 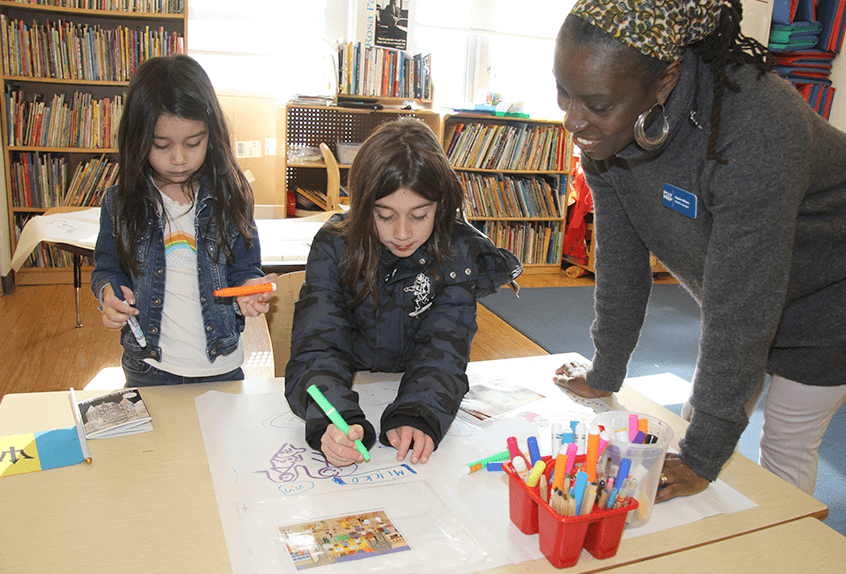 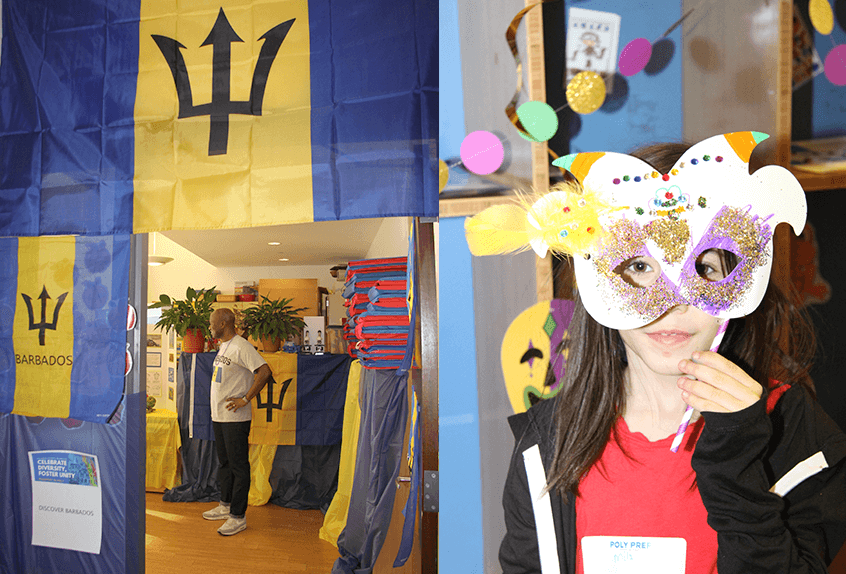 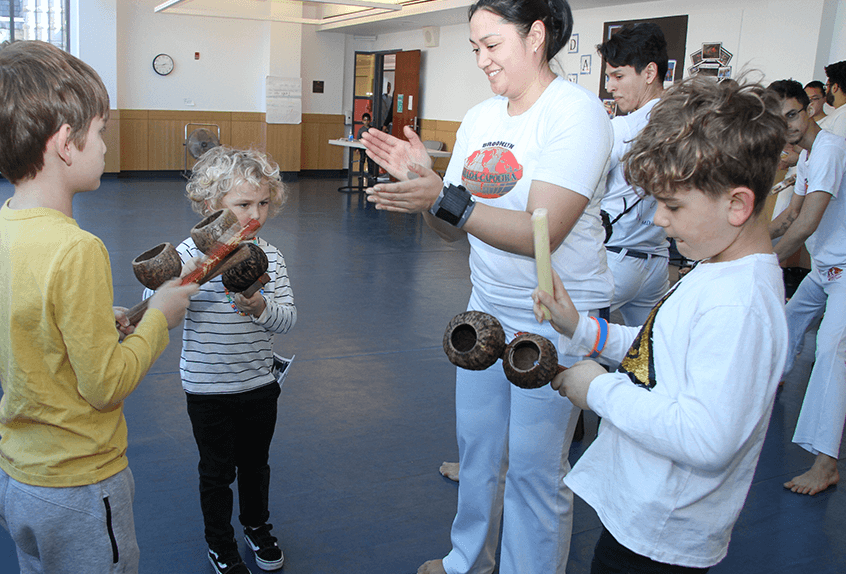 And the Students of Color Affinity Group, started by Kindergarten teacher, Kim Davis, is a breakfast series which provides monthly networking and programming for Black and Latinx, as well as other students of color in multiple grades. HUGs enthusiastically supports this student initiative. “They have held discussions about skin color, hair texture, African history, sung songs, and much more,” says Benjamin. “Sydney [his third grader] has gotten to know the students of color across the grades, increasing her sense of comfort in a school that is still predominantly White.”

Whether it’s working on school policies or creating inclusive programs for parents and students, the impact of HUGs is palpable at Poly Prep.

Benjamin reports that after George Floyd’s murder and the protests that took place across the country, Poly had a number of events for parents. Participants felt open enough to discuss the challenges of speaking to their children about what was going on, and asked for help finding ways to better understand and empathize with the Black experience. It was a learning experience for parents who hadn’t confronted these issues before and a positive step forward for the community. The experiences with these events really brought the point of the groups home for him.

“It reiterated for me why HUGs is needed. To support the children who are navigating a world where even their parents are lost as to how to help them understand different cultures, empathy, and the issues that are affecting our society today.”

What’s next for HUGs?

Of course, there is still work to be done. And lots of it.

“Representation and belonging are foundational to education of any kind. Our community has a long way to go,” admits Bennett. But she is optimistic. “We believe our Poly community, at large, is invested and committed to doing that work and upholding those values.”

“Frieda felt so special seeing her family up for celebration and the other families like hers.  As her parents, we are proud to be a part of a community that holds space for our blended family.”

Ilunga addressed the importance of the groups working together. “Although each group addresses the unique challenges of our communities, we are aware of the intersectional nature of identity. By collaborating with each other and Poly’s DEI director, we are invested in building a thriving community for all families.”

“It is important for parents of color to work in collaboration with the school in order to ensure at all times that the environment at Poly is equitable, anti-racist and just.”

This extends to every underrepresented group, whether they have already joined HUGs or will be part of future iterations. Bennett summed it up: “The closer we can get to representation and belonging for all historically underrepresented families, the better.”

Ilunga explains how they can move ever-forward, even with the ability for in-person connection limited.

“We are developing ways to connect virtually, and we plan to use this moment as an opportunity to build relationships with Black and Latinx Poly alumni and faculty, as well as families who could not attend events in person,” she says. “In addition, we will continue to collaborate with the other HUGs groups and Freedom from Bias to transform the pain of systemic racism into action that will make Poly an even more inclusive, dynamic, and anti-racist community for all students.”