Former Olympic heptathlete Kym Carter is Poly’s new Athletic Director as of July 1, 2022. Carter has had a distinguished career as a professional athlete, track and field coach, nonprofit director and fundraiser. She was inducted into the Kansas Sports Hall of Fame in 2020.

Stepping into her new role, Carter is “interested in listening to people and learning about the school,” finding out “how athletics fits into a student-athlete’s life at Poly Prep.” In her first days on campus, this meant meeting individually with at least 27 head coaches, from the veteran of 47 years to the latest coaching hire. Her first impression: “They are a great bunch of dedicated people. Each coach expressed to me how excited they are to work with the students at this school.”

“Given the history of our athletic department, the impressive academic standing of our student-athletes, and the positive competitive trajectory of our sports teams, this was a desirable leadership position to fill, drawing interest from across the country,” said Richard Corso, Head of Athletics. “Among those expressing a high interest, Kym Carter was the most impressive, offering a wealth of experience and the requisite leadership capabilities to oversee an Ivy League scholastic athletic program. We welcome Kym to the Poly Prep team and look forward to her taking the reins and advancing our athletic programs to even greater heights. In her, we have the right person for the job.”

About 80% of Poly students are involved in an organized sport. Carter wants all Poly students to have a positive athletic experience- whether it’s on the field or supporting from the stands.  She can empathize with the challenges and rewards of the student-athlete experience. She set the National Federation of High Schools record in the high jump as a senior at Wichita East H.S. in Kansas, clearing 6 feet and 2 1/4 inches. She qualified for the 1980 U.S. Olympic trials as a sophomore, and never lost a high school high jump competition.

Although she did not start playing basketball until her sophomore year of high school, by her senior year she was voted first team All-State and the number one girls’ player in Kansas. Honors like this earned her number one athlete in the state as a senior—boys and girls. In her final year at Louisiana State University, Carter switched to the heptathlon and gained international recognition. She was instrumental in the 1987 Lady Tigers winning Indoor and Outdoor Southeast Conference Championships and Indoor and Outdoor NCAA Championships—the only track and field team in history, men’s or women’s, to achieve that distinction.

During the 1992 Olympic Trials in New Orleans, Louisiana, Carter turned in one of the gutsiest performances of the meet, in her signature event, the 800 meters. Not only did she break her own American record, that performance catapulted her from fourth to third place, and earned her a coveted spot on the Olympic team bound for Barcelona, Spain, where she finished eleventh. She was the No. 1-ranked U.S. heptathlete in 1995 and finished second at the 1995 IAAF World Indoor Championships and third at the 1997 IAAF World Indoor Championships. All in all, she earned a spot on more than a dozen national teams and was named USA Heptathlete of the Year twice.

“Being a collegiate and professional athlete was never a sacrifice for me, it was right where I wanted to be. In college, your team was a built in support system, people who are friends to this day.”

Carter earned a BA in Broadcast Journalism-Radio/ Television News from Louisiana State University and worked as the News Director for KLSU Radio her senior year. And although she landed coveted positions as a news writer and reporter in both radio and television after she graduated, she knew it was not the career for her. “Even then, it was too much about ratings and not enough emphasis on news,” she said. Carter loved the life of a professional athlete, training for five or six hours a day, being mindful of healthy eating and sleep habits. She says of that time, “Being a collegiate and professional athlete was never a sacrifice for me, it was right where I wanted to be. In college, your team was a built in support system, people who are friends to this day.”

Carter knows well “the special place that sports can play in a young person’s life.” In middle school, she had no interest in athletics and instead tried out for the cheerleading squad. Cheering from the sidelines, she watched volleyball and basketball games up close. Mr. Jackson, the middle school track coach, encouraged her to try out for the track team and she had fun trying lots of different events. In high school, she continued track and cheerleading and added volleyball and basketball along with student government. “I was a good student, but I was always pretty shy as a kid so sports and clubs forced me out of my shell and created an avenue for me to become involved at school.”

As a coach, Carter has trained student-athletes from third grade to the college level. She says the role of a coach is “to encourage an athlete to push harder than they think they are capable of.” Giving your all during practice is such a satisfying feeling. I’m a positive coach, but I have to be honest, I am tough. Sports aren’t easy, but I challenge in a supportive way. Push yourself in practice and you can expect great results, if you compete the way you train.” She added, “Not everyone can come in first, but there are so many different ways to win—personal records, getting more technically sound. It is growth that is important.” Sometimes, that can be a coach introducing a student to a new sport and watching that child have a great experience doing things they never thought themselves capable of. Carter stressed that good coaches coach every athlete who comes out for the team.

Before coming to Poly, Carter was head coach at Notre Dame Academy, and Marlborough School and assistant coach at George Mason University and Notre Dame High School. Her athletes have enjoyed great success under her guidance, at every level.

Even as a competitive athlete, Carter sought to improve the lives of communities in need. She came to Poly with extensive nonprofit experience.

Carter is excited to be back in New York City and here in Brooklyn, where one of her best friend’s from elementary school lives. She loves going to a Broadway show and is looking forward to seeing the Tony Award-winning production of A Strange Loop and going to the Met. But, she is just as eager to be in the audience for Poly Arts musicals and concerts, in the bleachers at Blue Devil Night, or appreciating the talents of artists at the Winter Arts Exhibition. “I will be here cheering everyone on!” she said.

In whatever way she can, Carter hopes “to help every Poly student, whether an athlete or not, thrive here.” 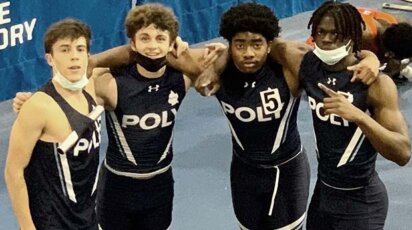 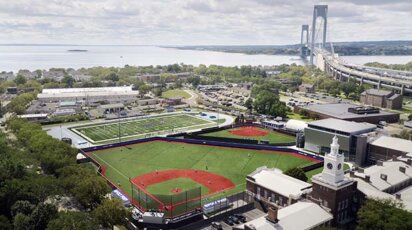