You could feel the excitement and adrenaline on the courts and fields as Poly student-athletes and their coaches returned to action. Their hard work and training paid off—Varsity Girls’ Volleyball, Varsity Girls’ Soccer, Varsity Boys‘ and Girls’ Cross Country, and Varsity Girls’ Tennis competed in the NYSAIS championships in November. Varsity Football competed in the Metropolitan Independent Football League (MIFL) playoffs.

Bella Nash recalls that traveling with her teammates to Las Vegas and Phoenix helped the players grow close as a team. She added, “And I believe that what made this team a championship team was how hard our coach pushed us to do our best.”

“I would definitely say that my personal highlight was meeting new faces and growing as a team,” said Scarlett Beard. “Particularly for this year, 12 out of the 14 girls were new to the Poly team so we had to work really hard on gaining chemistry. What made this a championship team was our extreme talent and potential. Every single one of the girls worked extremely hard and it ended up paying off.”

Winning the semi-final game against Avenues was the highlight of the season for Paulina Marino-Bindi ’23. “I feel like it was the most competitive game of our season and there were different things at stake other than just making it to the championship match.” “Although our team had extraordinary talent this year,” said Marino-Bindi,  “I really think that the team’s chemistry is what brought us together to be the championship team we are.”

The tennis courts were on fire this year. Polygon editor Carly Pyles ‘22 reported, “For the first time in years, the Girls’ Varsity Tennis team made their way to the Ivy Prep League Championship match after finishing an incredible regular season with a 7-1 record. Led by coaches Jeff Amurao and Shweta Rana, the team packed their bags and headed up to Tarrytown to face Hackley on Wednesday, October 27.”  “Though Poly lost 2-3,” Amurao said, “making the finals was a significant achievement with both Holyn Karp ‘25 and Bella Saul ‘22 securing victories in the loss.”

In the Ivy Prep League Championships, the Poly Varsity Girls team recorded convincing victories against Horace Mann and Dalton, before reaching the finals vs Hackley and falling just short of a finals team victory in a 2-3 loss.

“It marked a strong season in which Poly finished at 7-1 overall in both conference and non-conference matches,” Amurao said.

Both Karp and Saul were recognized with First Team All Ivy honors.

There were many season highlights: Karp dominated at 1S, losing to only one player all season, eventually making up for that loss in the Ivy playoffs against Hackley. Saul finished with an overall singles record of 10-1. Senior captain Francesca Corsalini ’22 showed her versatility at both singles and doubles, recording winning records in both.

Pyles said the personal highlight of the season for her was Senior Night. “Our teammates made all of the seniors feel so special and appreciated, and to add to the celebration, we won our match 4-1! It was really a great night. I think what made this tennis team special was the bond among all of the team members. Everyone showed up whenever they were needed, and put their all into the practices and the matches. What probably helped the most was that everyone just really enjoyed spending time with each other. I think we can attribute our success mainly to our amazing team dynamic and our coaches.”

“Seeing the team progress in their ability to come up big in high pressure situations,” was the highlight of the season, Amurao said. “In our regular season Trinity match, Mia Edwards and Carly Pyles caught fire in the match tiebreaker of a tense first doubles match. Under the lights, I saw them both perform at their peak under tremendous pressure and in front of a raucous crowd of spectators. It was exciting to witness. On the final point, Mia ripped a down the line forehand for a winner. It marked our first dominant 5-0 shutout and the start of a 15 individual match win streak.”

Karp said, “My personal highlight from this season was beating Hackley’s #1 singles senior. It took two competitive days and the final score was 6-4 5-7 and on the second day I won in the third set 6-0.”

“Our team had a strong bond this year,” Karp added, “It was important that we supported each other during the matches and we did that extremely well. The doubles teams had great teamwork and we all practiced long and hard, sometimes at 6:30 AM, in order to make it as far as we did.”

The Girls’ Varsity Soccer team came back to the pitch after 22 months off due to the pandemic with a fresh outlook and ready to work. With a mix of new players and seasoned veterans, the Blue Devils came out to a 5-0 start to kick off the season. With the leadership of two time NYSAIS Champion seniors Annabel Bayer ‘22, Emily Boyer ‘22, Tamia Dubidad ‘22, Bella Farkas ‘22, and Cate Lambert ‘22, the young squad navigated the challenging Ivy League schedule en route to a 3rd place finish in the Ivy League.

Emily Boyer ‘22 remembers the preseason trip to Rhode Island with her teammates as an integral part of connecting as a team. She said, “After being away for so long it was a great way for us to get to know each other, especially with so many new 8th, 9th, and 10th graders on the team.”

In the NYSAIS playoffs, Poly won its first round game 2-0 against Columbia Grammar Preparatory School of Manhattan. This was followed by Poly upsetting #2 ranked Hackley in the quarterfinals 1-0 at Hackley’s home field. Poly then hosted the semifinal round in front of a record crowd of 700 before falling in a hard fought battle on November 5.

Annabel Bayer said of the season, “Our team is really inclusive and sets high standards for each other, led by our coaches. We work really hard but we also have so much fun and that shows in how well we get along. We seemed to all get better at the same time which helped us keep winning throughout the season.”

On Sunday, November 7, Poly’s Cross Country team competed in the 5,000 meter run in the NYSAIS Championship at Van Cortlandt Park.

“The highlight of the meet,” said Coach Daniel Winn, “was Kofi Rossi’s ‘25 ninth place finish—the top freshman in the race by almost 40 seconds. Captain Fox Kloske ’23 was Poly’s second finisher in 41st place. On the girls’ side, sophomore Eleni Smith ’24 finished 77th in her first NYSAIS appearance.” “As for the season as a whole, it was successful on an individual level as almost every runner ran personal records in the last two races of the year—Ivy Champs and NYSAIS. Only two runners on the team were returning members of Poly Cross Country, so it was very much a learning-the-ropes season as we transition to indoor and outdoor track, and next fall, as the team only graduated one senior, Captain Caleb Kim ‘22. Sophomore Hazel Budker ’24 was captain of the girls’ team.”

On our first Blue Devil Night on September 24, Poly’s Varsity Football team got the season off to a great start with a  35-0 victory over Rye Country Day School. At Homecoming, they also shut out Pennington by a score of 31-0. Another football game in the rain against Hackley and another victory over Hackley this season. With a 32-0 victory over Hackley, the Blue Devils Varsity Football team progressed to the final MIFL playoff game vs Hopkins in Connecticut. Unfortunately, after a valiant effort, Poly lost to Hopkins by the score of 38-36, finishing the season 6-2. 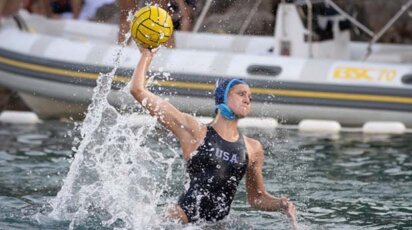 Poly athlete will represent the USA at the 2022 Pan Am Games in Brazil. 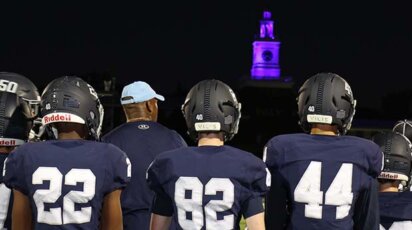 What a night to come together together and show our Poly spirit!