With the film version of Lin-Manuel Miranda’s musical In the Heights coming to theaters on June 10, we can’t help recalling Poly’s own vibrant 2016 production about the characters who make up a close-knit Washington Heights community. Making it even more memorable, shortly before the show that year, Miranda gave a virtual masterclass in the Richard Perry Theatre for the cast, answering questions about their characters shortly before the presentation of the Upper School musical.

Julian McBride ‘16 and Kristen Haynes ‘16 competed in the Roger Rees Excellence in High School Musical Theatre Performance Awards that spring. Haynes sang  “Won’t Be Long Now,” her solo from In the Heights.

Sonya Baehr, who directed In the Heights, accompanied the students and reported that Haynes, who was one of 10 finalists, was awarded a $5,000 scholarship to the LIU Post musical theatre program. Haynes went on to The Boston Conservatory at Berklee College of Music that fall and McBride went to Brown University.

Julian McBride, who played Usnavi de la Vega, recalled, “One of my favorite memories from In the Heights was from our Sunday night show. Emotions are high, because for many of our seniors this is the last time we’re doing the songs for our last show on this stage. I was just on stage with Micaela [Rodriguez], who effortlessly played Nina in the show, to perform our song Everything I Know, where I leave halfway through and she delivers the climax of the song solo to the audience. I’m the only other actor in the wing, watching her pour her soul into this last performance, and could not be more proud. After a standing ovation from the crowd, she comes into the wing, gives me a warm smile, and brings me in for a tight hug. She reminds me of how far we’ve come, how it all started when we played Danny and Sandy in Grease all the way back in eighth grade. I tell her, ‘I can’t cry. Not before we say goodbye to them,’ gesturing to the crowd.”

“It’s a moment I remember because it reminds me of how these musicals were more than after-school activities,” McBride said. “We really cared for each other like a family.”

The In The Heights cast was a family in every sense of the word,” agreed Gabby Rosenbloom ‘16. “We worked together and loved each other so much. If I had to pick one thing it would probably be the fact that we used to go out for dinners at a hibachi restaurant and we always would pretend it was someone’s birthday. They gave us this ceramic buddha to celebrate. One day we decided to name him Kenny, we each took him home for a night, and took turns writing notes and leaving them in Kenny for the next cast member to enjoy. We continued doing this even after the show closed. By the end of the year we had a collection of probably 40 notes each containing hilarious things from every member of the cast. I miss that so much.”

“In the Heights was instrumental in helping me grow,” as an actor, singer, and dancer.”

McBride added, “It was my first leading role in an Upper School musical, so it put a greater demand on my shoulders than ever before. Singing-wise, I couldn’t have had a character better suited to my strengths, being able to both sing and rap for the first time. So I was able to stay within a comfortable range while also getting to explore and experiment with the depth of my voice. As a dancer, the show added many of the different Latin American styles to my repertoire—the salsa and meringue especially!”

“As an actor,” McBride said, “Usnavi was a character with a lot of hidden depth: survivor’s guilt for making it to the U.S.; longing for his family in the Domincan Republic; his sense of responsibility to the community in Washington Heights, and these feelings conflicting with each other. Amid all the color and music, In the Heights has serious emotional gravity. So I felt myself growing, especially in smaller scenes with the other lead actors, getting at the nuances of Usnavi’s motivations.”

Another cast member, Trevor Nunez ’17, said, “Since leaving Poly I have joined the Latin Dance troupe at my university called Onda Latina. Joining the troupe allowed me to continue to perform at a high level for the Penn and Philadelphia community while also serving as an artistic outlet of self-expression. Now as a recent graduate I plan to continue to create space in my life for the performing arts, particularly dance and movement. “ He added that the confidence he developed on the Poly stage have helped him in the arena of public speaking and advocacy. “As an aspiring lawyer and public advocate, I know these skills will continue to serve me well in my career.”

Rosenbloom majored in theatre arts at The University of Miami and graduated during the pandemic in May of 2020. “In school I performed in eight shows, with roles including The Witch in Into The Woods, Cathy in The Last Five Years, and Victoria in MotherF**ker With The Hat.” She is now the Marketing Director and Executive Producer of a virtual theatre company called Russo Richardson. “My double major was in Public Relations and upon graduation I founded my own full-service PR company, GBR Creative. I am lucky to be able to pursue both of my chosen careers.”

“What I learned at Poly in the theatre department,” Rosenbloom said, “I carry with me to this day.”

“The primary thing, though, was the importance of being an ensemble. If your cast can’t operate like a team, it’s not going to succeed. Every show I did at Poly—from student theater to mainstage shows—that lesson rang through.”

“Poly almost over-prepared me for the performing arts in college because it taught us the habits of professional-level performing at a very young age.”

“Poly almost over-prepared me for the performing arts in college,” McBride explained, “because it taught us the habits of professional-level performing at a very young age. The Poly Performing Arts Department has always been special to me because of my relationships with the faculty, but also for how impressive our level of training was. Ms. [Sonya] Baehr’s ability to bring dramaturgy front-and-center, building the world around the show, before even reading lines showed how well she understood the practice of acting. Steven, our beloved choreographer, brought many of the moves for our show from the actual In the Heights Broadway performance! Mr. Doughty, who has such a fine understanding of technique and treating the voice like an instrument, led us like he would a professional chorus, working with many of us individually, and with precision, to bring out the best in our voices.”

“At Brown, I jumped into theatre right at the start of my freshman year! That fall, I had the joy of playing Walter Younger in an adaptation of Lorraine Hansberry’s, A Raisin in the Sun. That spring, I then participated in an original musical written and directed by a senior for their thesis titled Back o’ Town, centered around a musical community in New Orleans’ 9th Ward recovering from Hurricane Katrina.”

“That freshman fall at Brown,” McBride continued, “I also joined an a cappella group named Shades of Brown, a group that made music rooted in African-American styles like neo-soul, R&B, and hip-hop. I performed with the group all throughout my four years there, where they quickly became a second home for me on campus. We all still keep in touch to this day, and you can see me performing with them in videos on our YouTube page!”

Poly on Film Features “The Argument” with Dan Fogler ’94

Alumni guests have career paths that focus on social justice and activism. 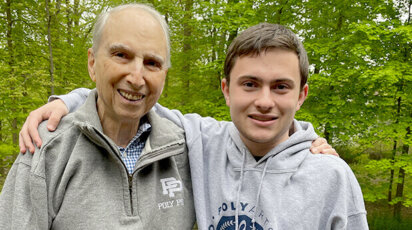 All in the Family: 70th Reunion Alumnus and Grandson in Class of 2021

Richard Marlin graduated from Poly in 1951, and this year, so will his grandson, Robert Magnus ‘21.