You can say you knew them when. Congratulations to creative visual artists Martine Fiore ’22 and Leo Yihan Wang ’23 who won Gold Key and other honors in the 2022 Scholastic Art & Writing Awards for their photography and other artwork.

According to their website, The Scholastic Art & Writing Awards are “the longest-running, most prestigious recognition program for creative teens, and the largest source of scholarships for young artists and writers in the United States.” Students in Grades 7-12 may enter their original art and/or writing work and can receive a Regional Award: Gold Key, Silver Key, or Honorable Mention. New York City Gold Key winners move on to a national competition.

Martine Fiore ’22 won awards for her photography including a Gold Key for “Seeping Through,” and a Silver Key for both  “An Organized Mess” and “Driftwood.”

“‘An Organized Mess’ was the only photo I took for photography class out of the three that won,” said Fiore. “This photo was taken on the school’s Canon camera.  The other two photos were taken on my iPhone. I took ‘Seeping Through’ in January of my junior year when I was struggling through an upsetting moment. Rather than sinking into the negative feelings I was experiencing, I decided to capture my emotion and turn it into art. ‘Driftwood’ was taken during a family trip to Montauk. The only previous experience I had with photography was the Poly Prep photography summer class also taught by Ms. Scherer, which I took in my sophomore year summer.”

“An Organized Mess’ was taken in one shot. “I used a long exposure to create the overlaying effect,” Fiore explained. “I lowered the shutter speed on my camera to thirty second intervals so when I pressed the button to take the photo the aperture closed initially and then slowly opened over those thirty seconds allowing the light to seep in.  I made my first pose when the aperture first closed and then changed my pose holding it until the aperture fully opened again creating the overlaying effect.”

Fiore said she enjoys working in black and white “because it allows emotion to be at the forefront of a photo. There is no distraction, only the impact the light and shadows make on the subject.” She said this past semester she has begun to experiment with singular colors as well as desaturation.

Leo Yihan Wang, who is enrolled in Poly’s Excellence in the Arts Program, earned two Gold Key awards for his artwork: “Drown” and “Triads.”

Wang created “Drown” for his painting class, and “Triads” for his AP Art Studio class. “For ‘Drown,’ I used watercolor with colored pencils and ink drawing on top of it,” Wang said. “For ‘Triads,’ I used colored pencils to create the color chunk and I used graphite to shade.”

Asked what he would like people to take away from his artwork, Wang said, “I tend not to define my works with specific messages. But I really enjoy the emotions and tensions within these two works. I hope the viewers can feel that, too, as they look into these two works.”

“In ‘Triads,’ we see two parties fighting against each other,” Wang explained. “It is one of the most political artworks I have ever created, and I consider this as a bold attempt. I tend not to define my work with a specific message, but this is a recount of an event that I witnessed when I was a kid. At a time, people were angry and humanities turned into something ugly—represented by demons. Three is such a sacred number with so many religious connotations. Religion was a huge part of this story, not necessarily Christianity, but religion overall. I think the idea of the three really spiritualized the drawing into something bigger than realistically retelling the horror story, becoming a universal story of rebellion and resistance. But my favorite part is actually the two cactuses. Their existence is very random. While we are trying to figure out the meaning of three, the cactuses seem to tell us, ‘It’s all meaningless. You stupid.’ I can see different tension going on between the figures, demons, and symbols. I had a lot of fun drawing this one, and hopefully the viewers can enjoy finding the underlying message too.”

Students interested in participating in the Scholastic Art & Writing Awards should visit the website for more information. Submission for the 2023 contest opens September 1, 2022. 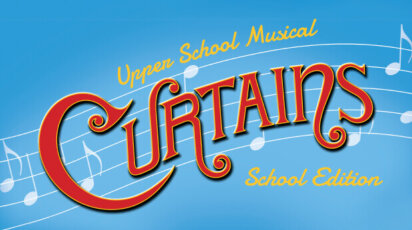 “Curtains” Is a Mystery Wrapped in Musical Comedy

Get ready for a rousing in-person performance of the whodunnit parody!