Preview of the US Musical “Songs for a New World”

Throughout the pandemic, Poly’s Performing Arts Department has triumphed and the show has gone on with Middle and Upper School plays. The latest challenge was learning songs and dances for the Upper School musical Songs for a New World, music and lyrics by Jason Robert Brown, via Zoom. The show will be presented on March 26 at 7 PM.

Songs for a New World, a song cycle and Brown’s first produced show, debuted in 1995. In Poly’s version of the musical revue, the majority of the musical is set in New York between March 2020 and March 2021 with the exception of one sequence on board a ship in 1492 and another sequence set in a colonial house in 1775.

Production Staff Who Made it Possible

“This year,” said Dan Doughty, Chair of the Performing Arts Department, “the production team, myself included, would not have been able to bring a musical of this scale together without the on-the-ground training we received since last March. Teaching online and outdoors in tents, navigating health and safety protocols, and creative problem-solving is what laid the foundation for the protocols we used for the Upper School Musical.”

“While it has been challenging,” Doughty said, “I am grateful for the opportunities I have had to stretch my teaching skills. I am proud of my colleagues in the Performing Arts Department: they found ways to maintain collaboration, promote skill development, and provide performance opportunities in their classes and fall productions, and they skillfully applied all they learned to this production.”

Dr. Caleb Goh, who is the director of Songs for a New World, also directed the Grades 11 & 12 play Love, Shakespeare. “That learning experience,” Dr. Goh said, “became the springboard for how to execute production on a virtual platform. That being said, it was still quite a challenge attempting to teach staging, choreography, and figure out musical moments in the show with only virtual rehearsals save for one in-person session.” He added, “Staging every performer 12 feet apart has been a real creative challenge, too!”

“This show was filmed on the stage,” Dr. Goh said, “so it actually made the performers feel like it was a live show. The cameras were barely noticeable to them. They performed it just like they would a stage production. Of course, the energy of having an audience see your performance live is lost in translation, but in a time of COVID, using the virtual platform to make theater has still been a blessing.”

Dr. Goh was asked why Songs of a New World is timely. “I have set the musical between March 2020 and March 2021,” he said, “having discovered how appropriate the songs and situations are in relation to the current struggles we are all facing together as a community. Theater has always been used as a way to shine a light on our society and the things we go through together. This song cycle gave me the ability to use the brilliant words and music and convey a message of hope while reflecting on the tragic events of this past year at the same time.”

Scenic designer Andrew Murdock explained, “Doing a musical feels like a whole new animal in the world of COVID. The main issue is sound. It’s vital to any musical and so hard to practice online using Zoom; and recording is even more challenging. We opted to perform it in person after rehearsing mostly remotely and film it live to combat the sound issues. But this, of course, presents other issues with social distancing. For the larger numbers we pre-recorded it and had the actors lip sync. It was the only way to get the full cast on stage. Other than that it’s pretty similar to a filmed stage production, but difficult with the limited time together.”

The Cast of Songs for a New World

In preparing for the performance, a Zoom masterclass with composer Jason Robert Brown was held for the cast of Songs for a New World. The class was facilitated by Poly parent and Academy Award-winning songwriter Kristen Anderson Lopez P’23, ’27.

“Unlike previous musicals that Poly’s Upper School has done, Songs for a New World does not have specific character names,” explained Samantha Rodino ’22. “Each song tells its own story, each connecting to overall themes of change and togetherness.” Rodino sings “King of the World” along with Leo Wang ‘23 and Natasha Ellis ‘23.

“When not rehearsing over Zoom,” Rodino said,  “Ms. Bensky sent out recordings of her doing the dances so that we are able to practice on our own. Mr. Doughty would send us recordings of vocal practice tracks to rehearse with. He also set up office hours so that we could Zoom meet with him one on one with any questions we had about our parts.”

Eliza Schwarz ‘23 is new to Poly this year. “I play a variety of characters,” said Schwarz, “My most specific ones are a sailor on a Spanish ship and a Revolutionary War soldier. I have never experienced anything like this in preparation for the show. What’s amazing is how everyone, the director, dance teacher, vocal coach, and crew have been able to think out of the box to pull off this musical. Unlike previous performances, all of the rehearsals have been virtual, whether it be dance, singing, or staging. That means that it was our responsibility as actors to prepare and learn our parts on our own. What was really challenging was the aspect of not being able to sing along with others around me. I wasn’t able to work with the people around me. The thing that we realized when we actually got to dress rehearsal in-person was that the stage was smaller than expected so it took a lot of troubleshooting to figure out how we could all stay safe.”

“I think what I learned most about myself,” Schwarz said, “is, even though I was constantly worried that I was going to be behind, or unprepared, or confused all the time when I really put my mind to it and wasn’t afraid of asking questions, I realized I was more comfortable and in a safe space where it is OK to ask for help.”

Zeke Wise ’24 sings, “The River Won’t Flow.” “Our ‘parts’ are the songs we sing,” Wise explained, “since there is no dialogue in the show.”

“Preparing for it has been a tad stressful but also really exhilarating,” Wise said. “I’m new to Poly this year and was always amazed by the productions, so I was super excited to be a part of this one! It’s definitely been different from past experiences since you really have to take initiative and practice by yourself a lot.”

“Unlike Love, Shakespeare, we are filming the entire show in the theater which is great,” said Robert Magnus ’21, “though there is an extra COVID-19 restriction that says you can only sing 12 feet away from another person as opposed to the normal restriction of six feet.”

“I think that I’ve learned that I can do more than I thought I could,” Wise said, “For me, the fact that we’re apart brings us together, and I definitely feel a lot more comfortable in this cast, like if I mess up accidentally I won’t be ridiculed.”

Magnus said, “I learned that you can pretty much get anything done within any time frame if you put your mind to it and are willing to pivot when it is necessary. I was also reminded of how lucky I am to be a part of this theater family and how much I am going to miss them next year when I am in college.”

Jasmine Donald ’24 explained, “The songs that we sing do follow a very interesting plot and it’s one amazing story. Preparing for this role was interesting because instead of trying to focus on the feelings and emotions of a certain character, I had to focus on the feelings and emotions my character is trying to convey through the songs. I must admit that doing rehearsals on Zoom has been challenging because we can’t hear each other when we sing, so we don’t know how the harmonies sound. It also is a challenge when we try to go over choreography because we can’t see how we all look dancing together on stage until the day we film or do an in-person rehearsal. Fortunately when we met up for an in-person rehearsal, we sounded amazing and everything flowed a lot smoother than I thought it would be.”

“A major lesson I learned about myself,” said Donald,  “is that I’m happy as long as I get to make something awesome with my fellow cast members. Our bonding during these challenging times has become something I value and I truly believe that everyone is going to be blown away by our production!”

Photos from Songs for a New World Rehearsal 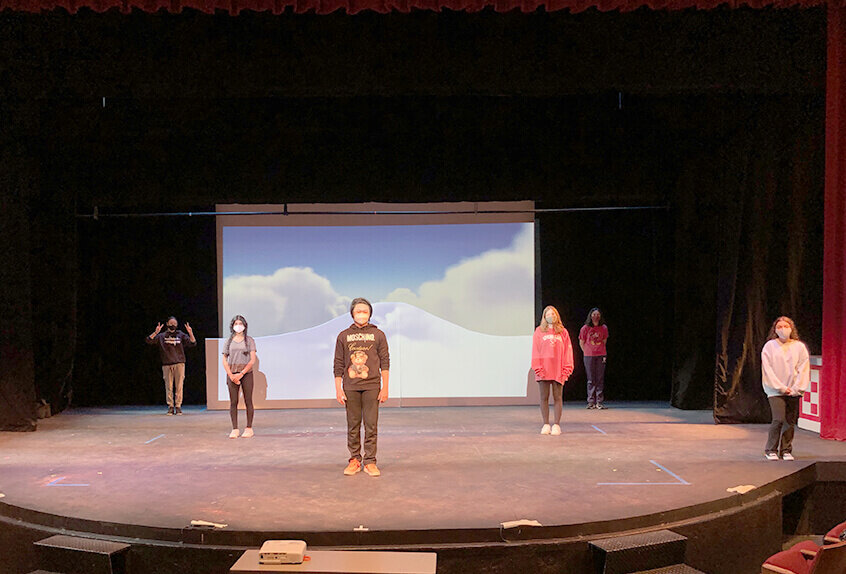 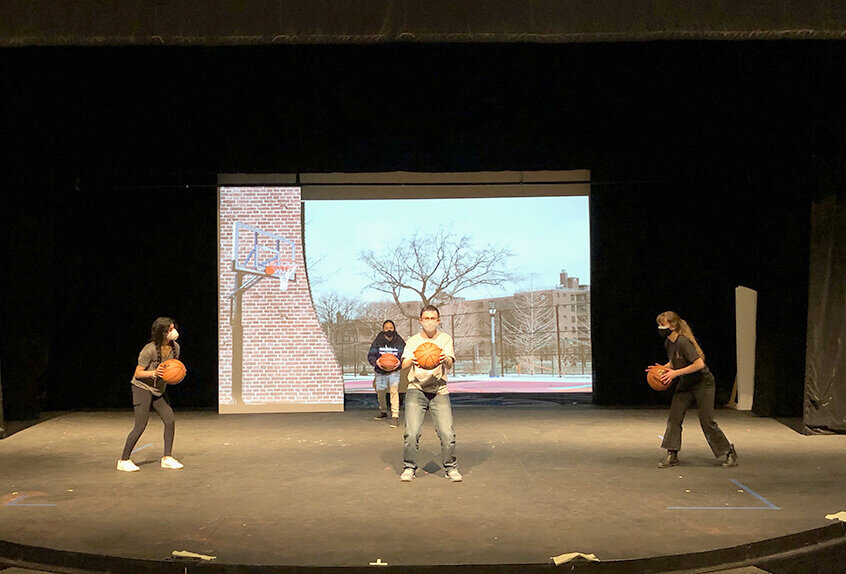 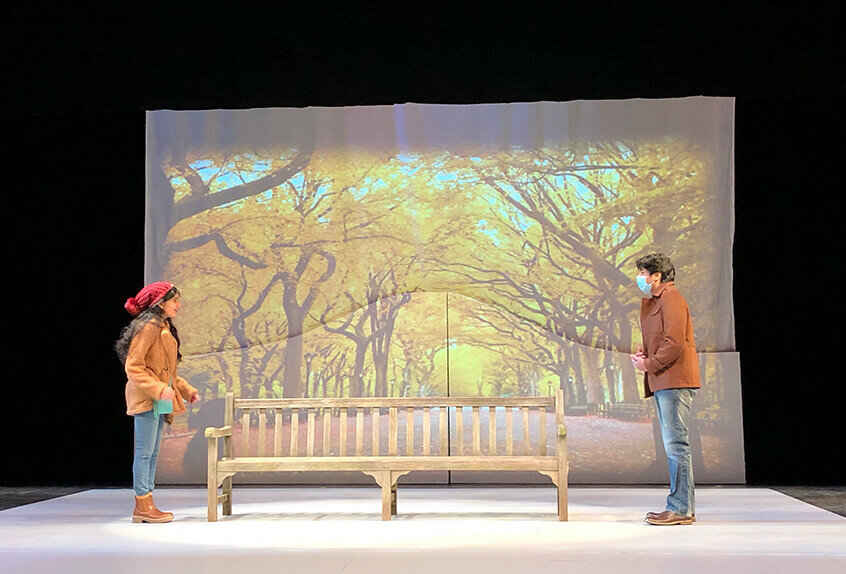 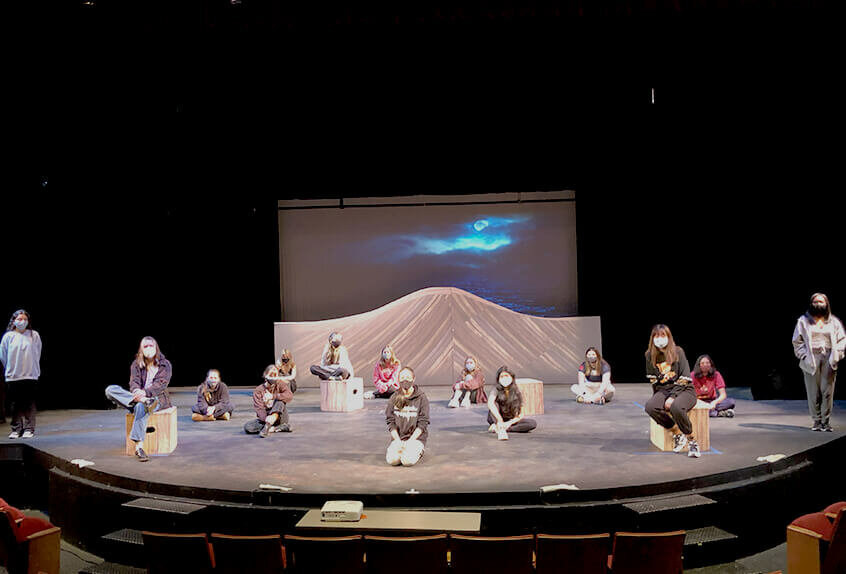 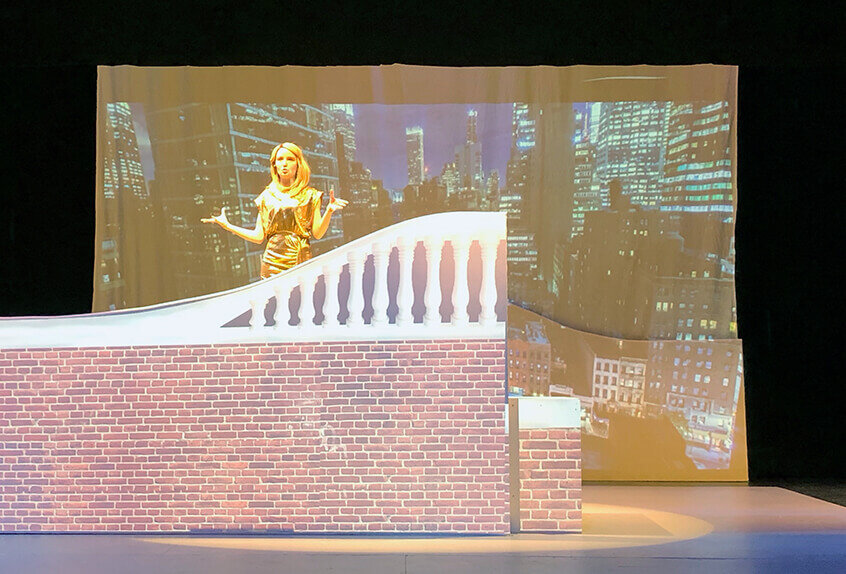 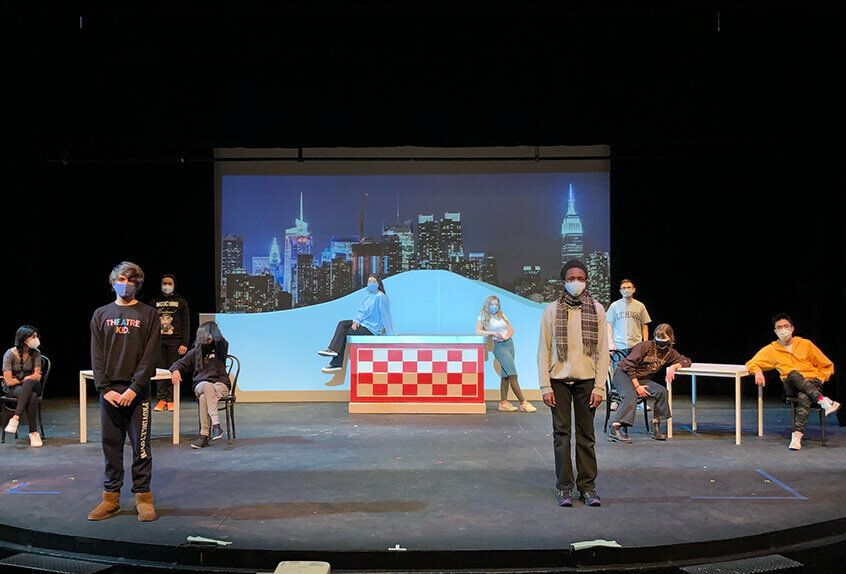 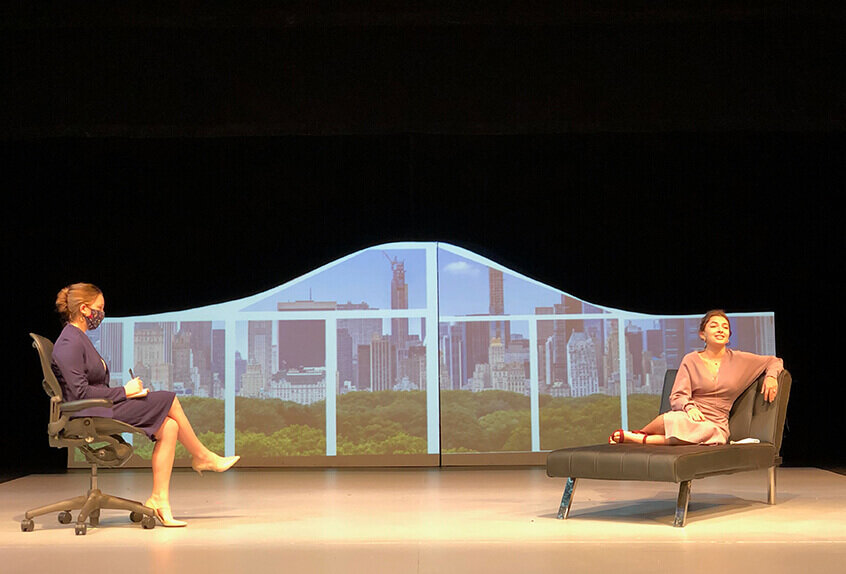 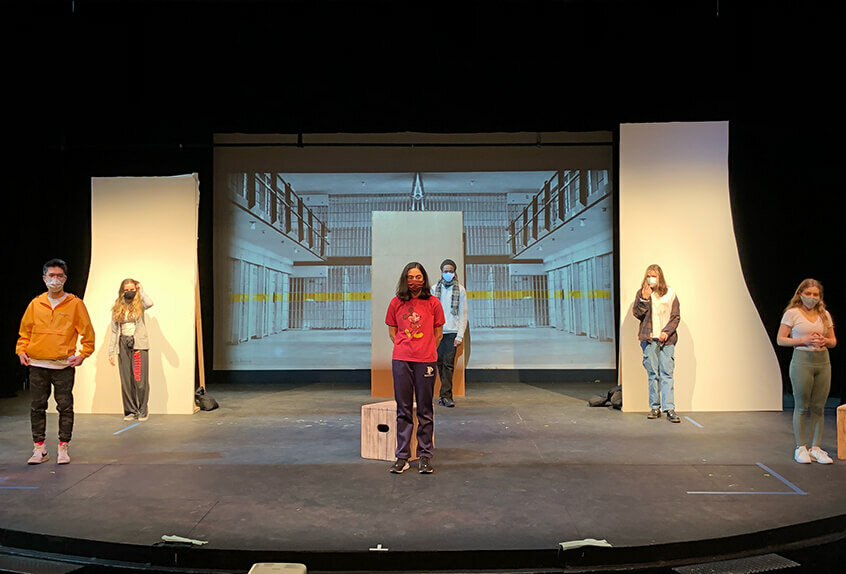 Murdock said, “I am constantly impressed with the students. Even with practicing remotely, and sometimes only having the shooting day to practice it live, some still managed to do it in one or two takes without having to redo it. They deliver even without the audience to push them that extra step. It’s never the same, but they are all making it work and coming out on top.”

“Even in times of strife, we can make magic together and bring hope through our words, our music, and our performances.”

“I hope that my performers realize how resilient we are as artists and people,” Dr. Goh said. “Even in times of strife, we can make magic together and bring hope through our words, our music, and our performances. We now have more stories to tell than ever, and we hope that everyone will come along with us on this journey so we can share them.”

Dan Doughty said he is very proud of the talented cast and crew. “They had a very challenging rehearsal process, an abbreviated production schedule, and some of the most demanding music we have done in a Poly musical. But they were focused, independent, and hard-working. Though they were not together physically, they brought joy and connection to the process, and they have amazed and inspired me with their performances.”

Families may register to Watch the Virtual Performance of Songs for a New World on March 26 at 7 PM. View the program.