Poly’s Director of Music Dan Doughty will be the recipient of the 2022 Poly Spirit Award at Homecoming on October 15 at 4:00 PM. The Alumni Association Board of Governors announced the selection. The Spirit Award is bestowed on a member of the faculty or staff who embodies the values and spirit that Poly seeks to represent as an institution and encourage in its students, and who has worked at Poly for at least five years.

Music to Our Ears

Since arriving at Poly in 2006, Dan has inspired scores of student vocalists. He served as Middle School Performing Arts Coordinator (2009-14) before becoming Chair of the Performing Arts Department, and, since 2021, has served in the new role of Director of Music. He teaches Middle School general music, directs the Middle School and Upper School choral ensembles, and has been the musical director for 14 musical productions, seven in the Middle School and seven in the Upper School. At every Spring or Winter Concert, Dan is front and center enthusiastically directing the voices of Concert Choir or Advanced Concert Choir in memorable and moving renditions of choral music. As advisor since its inception in 2012, Dan has guided the Blue Notes a cappella group, always a highlight of any concert performance.

Over the years, Dan has taken members of Concert Choir to perform internationally in Canada, Costa Rica, Germany, Czech Republic, and Cuba, as well as five performances at Carnegie Hall and one at Lincoln Center.

Most recently, Dan has introduced students and faculty to a variety of different music genres with the PolyMusic Lunchtime Concert Series where the Dyker community is treated to live, informal musical performances in the Oval. Earlier this month, he kicked off the school year with Son De Brooklyn, a band which played classic music of Cuba and Latin America just in time for Hispanic Heritage Month. Students were seen dancing and enjoying the lively rhythms. Watch the video.

How Dan Has Inspired His Students

“In the early days of the Blue Notes,” Harold Theurer ’13 recalled, “when we were still trying to determine the group’s ‘voice,’ so to speak, the group had the creative liberty to select our repertoire and sing what we found to be new, interesting, and exciting. This was the basis for some of my favorite moments in the group, and I have many fond memories brainstorming song options with Dan during those two years.”

>> Read more about Poly’s Blue Notes who celebrated their 10th Anniversary in 2022.

Tara Muoio Holzer ’13 sang as part of both Concert Choir and A Cappella at Poly. “Mr. Doughty always created a learning environment that was welcoming and free of judgment,” Holzer recalls. “He always encouraged us to do and be our best, but never at the cost of our love for music. Mr. Doughty gave me the opportunity to explore my musical interests and skills by permitting me to arrange pop music pieces for our winter and spring performances. I fell in love with it, and arranging music remains a hobby of mine all these years later. I have him to thank for that.”

“At every performance,” Holzer said, “Mr. Doughty would always take a pause before getting ready to begin the program. He would always have this smile on his face that was supposed to remind us all to smile, but almost always had me chuckling as it looked less like a happy smile and more like a look that exuded anxiety! In my first semester of college, I had to conduct something on my own, and that ‘smile’ was the only thing I could think of.”

Andrew Giurleo ’15 was an early member of the Blue Notes. “You could tell that Mr. Doughty was really excited about the idea of the Blue Notes and went above and beyond to make it happen,” Giurleo recalled. “For the semester that I was in the group, we all met in the choir room after the late bus left so that it wouldn’t conflict with other after-school activities. Even though he had been working all day and often all evening, Mr. Doughty was energetic and patient with us. The fact that Blue Notes has endured for a decade is a testament to Mr. Doughty’s excellence as an arts educator.”

“Mr. Doughty never let any of us believe that there was any limit to our ability,” recalled Gabby Rosenbloom ’16, who performed in Poly musicals such as Les Miserables and In the Heights, as well as in Concert Choir.  “We all had the opportunity to expand not only our vocal technique, but our arsenal of musical knowledge. We sang everything from Top 40 to musical theater and everything in between. He gave us the space to grow and I am so grateful for that.”

“My favorite Mr. Doughty memory,” Rosenbloom added, “is when we went to Europe in the spring of my junior year. Watching his pride and excitement every time we sang in a new venue in Germany or took a group photo in Prague inspired us to do and be better.”

“Being in Advanced Concert Choir has been one of my favorite experiences at Poly so far, and that’s in big part to having such an amazing teacher in Mr. Doughty.”

Lulu McDonald ’24 was part of a group of Concert Choir and Advanced Concert Choir members, who performed at Carnegie Hall in April with approximately 200 students from around the country and Canada. McDonald said,  “I’ve only known Mr. Doughty for less than two years, but from the beginning he’s been such a great teacher and makes learning music really fun. He’s helped me a ton in developing my skills as a singer and musician, whether that’s been learning more music theory or helping me through a really challenging song in a language I don’t speak. Being in Advanced Concert Choir has been one of my favorite experiences at Poly so far, and that’s in big part to having such an amazing teacher in Mr. Doughty.” When asked her favorite memory of Doughty as a teacher, she said it “was last year during Advanced Concert Choir, when we were all begging to know what the musical was and he told us he’d play a song from it for our warm-up — then as a joke played a song from the Sound of Music. We all got so mad and it was really funny.”

“Mr. Doughty inspires me to become a better vocalist by giving me opportunities to go out of my comfort zone and test my vocal abilities,” Jasmine Donald ’24 said.  “He has a lot of confidence in my voice. Mr. Doughty makes me want to get better so that I can make him and myself proud of my growth.”

“Spending time in Advanced Concert Choir with him is one of my favorite memories, hands down!” Donald said. “The work that goes into preparing music for a concert and singing nonstop is so much fun and I wouldn’t trade it for anything.” 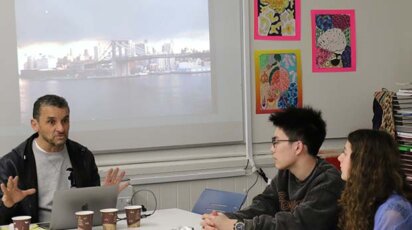 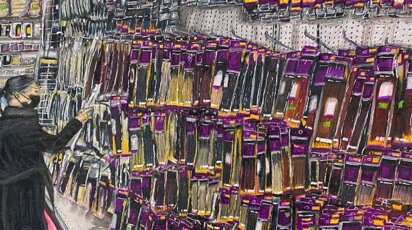 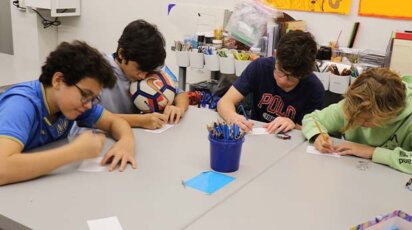