Getting Ahead by Exploring the Past: History Club

Poly’s History Club is a perfect example of a “community of scholars,” advisor Dr. Virginia Dillon said of the members who have a passion to “wrestle with complex ideas,” hone research skills, and collaborate to become better historical writers while having fun.

In June, one member, William Ling-Regan ’24, placed second in the National History Day competition with his essay, “Talking Leaves: The Cherokee Syllabary and the Trail of Tears.” Last year, Ling-Regan was the first Poly student to ever advance to the national level of the competition. In May, Ling-Regan, June Dorsch ’23, and Marisa Triola ’24 had advanced to the New York State levels of the competition. Dorsch placed second in the citywide competition for Senior Papers with “Victoria Woodhull: Radical Approaches to Women’s Equality” and Triola placed first for Senior Individual Website with “From Telephones to Chess: How Claude Shannon Communicated Through Machines.”

“When William advanced, they all advanced,” Dr. Dillon said of how they support each other, calling this an example of “character in scholarship.” “No one does it alone,” she said.

Because of the pandemic, the students did not have the opportunity to attend an in-person competition or awards ceremony. The History Club organized “The History Club Presents” on April 1, at which Dorsch, Triola, and Ling-Regan gave virtual presentations about their projects to an audience of students, faculty, family, and past advisors.

Ling-Regan explained that during this past school year, the History Club met at lunch with Dr. Dillon, an Upper School history teacher. “However, most of our work happened outside of school, on Zoom meetings that we scheduled whenever we had time,” he said. “In our meetings, we help each other with research, writing or citation questions, read over each other’s work and offer suggestions, or sometimes just use it as a block of time to work on our projects.”

History Club began as a Middle School club, but expanded to Middle and Upper School. June Dorsch ’23 has been part of the History Club since 2018 and president since 2019. “We usually discuss things we are tackling in the research or writing process,” she explained, “and talk about historical events and their larger implications, and, of course, have fun. The meetings definitely help with the final submissions, and we also have time outside of club time where the members work on editing and writing.”

“Earlier this year,” said Marisa Triola ’24, “when we were beginning our projects, we would often spend our club times planning deadlines for different aspects of our research and writing. Once we had written drafts of our projects, we used club times to provide feedback on each other’s projects.”

“Without Dr. Dillon, June, and Marisa,” Ling-Regan said, “I never would have gotten as far as I did. Dr. Dillon offered me so much guidance when it came to finding great sources and writing, but most of all, it was through conversations with her that I was able to figure out where I wanted my paper to go and what I wanted it to say.”

Dr. Dillon said she sees her role as being a “sounding board,” in addition to finding sources. “History can be overwhelming,” she said. “There is so much information and so many ways of telling a story.” As an “outside eye,” Dr. Dillon helps them find the best way to tell the story while being true to their subject. She asks them questions such as to consider, “What else is going on at the same time?”

Collaboration is central to the History Club.

“June and Marisa are the best teammates I could ever ask for,” Ling-Regan said. “We help each other along the way with our specific skills: June’s researching ability and argument construction, Marisa’s precise language and technical skills, and my writing and analysis. In addition to helping each other with our projects, however, we mostly just have fun collaborating, talking, and joking. We also help each other refine ideas for future topics.”

The theme of next year’s National History Day competition is “Debate and Diplomacy in History.” “I think that I want to study Asian or Asian American history next year,” Ling-Regan said, “as that’s something I’m particularly passionate about, and I think I’ll try to branch out from the 19th century time period of my previous projects. All in all, I’m excited for another year of research, writing, collaboration, and laughter with History Club.”

Dorsch is particularly interested in the mid to late 19th century. “The American social justice movements occurring in this time are incredibly important,” she said “and I often don’t know half of the story. This year I focused on Victoria Woodhull and delved into the suffragist and eugenics movements during this time, and I was surprised by the overlap in the two groups.”

In the year ahead, Dorsch said she plans to research the Marshall Trilogy, “a series of Supreme Court cases determining the rights of Indigenous tribes, and the groups of people that worked to get these cases to the court system.” John Marshall was the longest serving Chief Justice in Supreme Court history (1801-1835) and these three cases were the basis of federal law relating to indigenous people.

“I have learned so much about historical writing from being a part of the History Club,” said Triola. “I have received excellent feedback on my writing, and I constantly learn from my peers’ writing. Even though we each chose our own specific topics to research, mine being Claude Shannon, an electrical engineer and mathematician, I found that I learned so much about my peers’ topics from their writing.”

“Personally,” Triola continued, “I am most interested by the mid 1900s. The technological advancements from that era range from early machine learning to space flight, and it’s so interesting to learn about the origins of the technology that we use today. When I began my research on Claude Shannon, I was worried that his mathematical advancements would be too complex, or not interesting. I was surprised when I quickly discovered his love for juggling, and even games like chess. Shannon created machines that juggled, and even a machine that could play chess with a human, though it could only handle six pieces.”

Triola noted next year’s National History Day competition theme and said she is interested in researching the IBM 305 RAMAC, the first commercial computer with a hard drive, which was first used in 1956. “The RAMAC, though a computer, is often referred to as an ambassador because it answered questions asked by people in Russia about American life,” she explained.

Dr. Dillon says she loves advising the History Club. Contemplating an afternoon club meeting on a Friday at the end of a long week could be daunting, but she said that it was actually “the best way to end the week” because it reaffirmed her love of teaching during a challenging year.

All Middle and Upper School students are welcome to join the History Club. Contact Dr. Virginia Dillon about where and when the club will meet this fall. 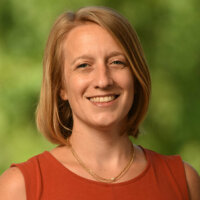