Jake arrived at Poly in sixth grade and excelled in Poly’s classrooms during his tenure here. He opened his speech reflecting on the sense of unity his class used to “compel change” and improve not only themselves as individuals, but also the community and school experience as a whole. He spoke about the passion for fighting for one’s beliefs and making sure student voices were heard. Jake shared his hope that students continue to carry this drive to make the world a more just place wherever life takes them. He will be heading to Dartmouth this fall.

Good morning faculty, families and friends, alumni, and of course, the graduating Poly Prep Class of 2022. I stand before you today humbled and excited by the opportunity to share a few words about our time at Poly Prep and the future that lies ahead.

But anyway, enough about me. I want to take this opportunity to talk about our class as a whole and what we’ve accomplished throughout the last four years.

When I look back on our time at Poly Prep, I am struck by the number of instances we came together as a class, united to compel change to try and improve our experience, both as individuals and as a community.

Our high school careers began with a walk out and subsequent sit-in, protesting a response to a blackface video that we found was wholly inadequate. In the next two years, we raised concerns about COVID protocols, growing frustrated with the cold in the tents, pushing back on constant mask-wearing and social distancing from our friends, not to mention spitting in those vials once a week. We fought vigorously when we felt coaches were unjustly dismissed and stood up for our fellow classmates. In so doing, we saw the power of unity and the importance of getting involved and having our voices heard.

To be clear, this discussion of all our resistance to Poly is not intended to criticize our school or the administration. In fact, I mean to do just the opposite. To me, it is a testament to the relationship we’ve established with Poly.

That relationship is more commonplace than you might think. When family members make mistakes, we tell them. When our close friends do something wrong, we don’t let it go. The same is certainly true of our relationships with our classmates. All of you let me hear it when I singlehandedly contact-traced a large chunk of the grade last year. We never let Devan or Bradley forget their driving incidents either.

This whole idea of resistance to authority can be considered a teenage phase, but I also believe it’s an American ideal. I know that that probably sounds funny coming from me, considering the fact that I’m Canadian and I never let anyone forget it, but I’ve spent enough hours in AP U.S. History and Gov to know that our country is predicated on the idea of disagreeing with the one in charge. That idea has been emphasized even further in the past century or so, whether it was within Women’s Suffrage, Civil Rights, or other great social movements.

These days, with talk of what it means to be patriotic dominating the social sphere, it seems that that sort of resistance is less celebrated. But I think we can all agree that loyalty doesn’t mean blindly following things that we disagree with. If someone is truly patriotic, if somebody truly loves their country—or school—they fight for the causes that make it the best it can be.

And that’s what we’ve done at Poly. We’ve never stood by and let things happen when we disagreed. We fought for Poly to handle its problems better, to be better, to be the best school it possibly could be. We have always strived to set it right.

So sure, all that disobeying, all that complaining, all that criticism over the past four years could be misconstrued as anger or disenchantment. But in my view, there is no better example of how much we love and appreciate our school. And Poly’s acceptance, and in fact, its encouragement of that discourse is testament to how much its administration and faculty care about us and our path forward. I encourage us all to remember that as we move on.

But I also encourage us to keep up that mindset. No matter where the next steps of our lives take us, we need to bring with us our unwavering inability to settle when things aren’t right. We can all agree that as it stands, there’s a lot in our country and, indeed, our world that isn’t right. And, as we so valuably learned in Mr. Winston’s workshops throughout the year, we’re not bystanders; we’re upstanders.

So I’d like to leave you with the following quote from former U.S. Senator Carl Schurz, which to me, aptly captures our Poly Prep spirit, and what I hope we take with us for the rest of our lives: “Our country, right or wrong. When right, to be kept right; when wrong, to be set right.” Thank you. 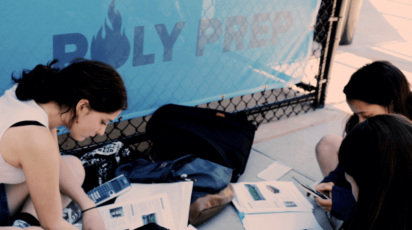 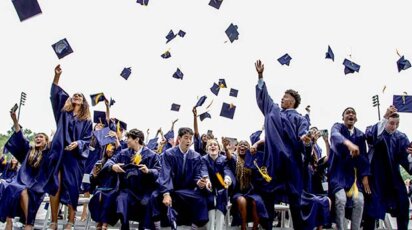 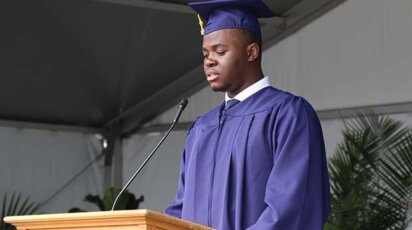 Ryantony Exuma ’22 was the Senior Speaker for the Class of 2022 at Commencement.