Poly on Film Looks at a Uniquely Asian-American Sport

Next up in the Poly on Film series is a discussion of the award-winning 2014 sports documentary 9-Man: A Street Battle in the Heart of Chinatown. The game of 9-Man is described as resembling volleyball and “traditionally played in parking lots and back alleys.” Join us on October 20 at 7 PM when Arts Outreach Director Robert Aberlin ‘62, P’00, ’03 will moderate a panel discussion on the film.

WATCH THE FILM ON VIMEO
9-Man: A Street Battle in the Heart of Chinatown
Password: V86t%y%6jb

The film had its world premiere at the 2014 Independent Film Festival Boston and won six film festival awards including two grand jury prizes and audience award. In announcing 9-Man as the winner of the Documentary Competition for CAAMFest 2015, the jury said the film “shatters what America thinks about the Asian American male identity by putting authentic, likeable characters in focus as they seek a sense of place and victory within the game of 9-Man. The story is bright and active, weaving hyperlocal histories of these American Chinatowns, spiking the arc with issues that are both nuanced and complex, inviting you to invest in its outcomes through the end of the film and beyond.”

For Ursula Liang, 9-Man was her debut as a director.  Liang has also worked as a journalist for The New York Times Op-Docs, T: The New York Times Style Magazine, ESPN The Magazine, Asia Pacific Forum on WBAI, StirTV, the Jax Show, Hyphen magazine, and freelances as a film and television producer (“Tough Love,” “Wo Ai Ni Mommy,” “UFC Countdown,” “UFC Primetime”) and story consultant. Liang is a founding member of the Filipino American Museum, and sits on the advisory board of the Dynasty Project.

Liang played volleyball growing up and as part of the University of Michigan club team. She became aware of 9-Man when her brother joined a team. She realized that the story of the sport and its 80-year history had not been told.

“9-Man is also a gem of a story that illustrates that there is so much that we don’t know about each other.”

Nancy Bulalacao P’33  was the Director of Public Programs for the Museum of Chinese in America (MOCA) when Ursula Liang was making her film. “I organized screenings and panels as public programs around her film,”  Bulalacao said. “Though MOCA is a museum that serves a national community, its roots are in Chinatown. So Ursula’s film was a natural fit and an important story to tell.”

“I didn’t know anything about the very secret sport before seeing 9-Man,” Bulalacao added. “It’s a fascinating story and one that I think resonates with a wider audience because of how it touches on a very American idea of exceptionalism rising from hardship and struggle.” She continued, “9-Man is also a gem of a story that illustrates that there is so much that we don’t know about each other. Despite the same stories and the same tropes circulating in mainstream film, there are ideas and communities that have yet to have their story told. 9-Man is a universe on its own.”

Nick Lee ‘04 recalls that around 2017-18 he played 9-Man volleyball while he was living in New York City. “I played for the Horizon team,” he said, “which was brand new at the time. I played on the first team they put out in the NY Mini.” The team practiced in Manhattan and the NY Mini is the biggest 9-Man event in the city, he said.

Watch the film on Vimeo: 9 Man: A Street Battle in the Heart of Chinatown
Password: V86t%y%6jb

Please follow PolyArts on Instagram for all the latest and greatest highlights from Poly’s amazing Arts program. 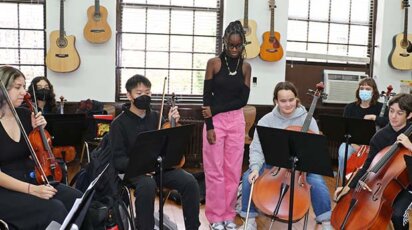 “Iridessa” by Jordan Millar '24 to be performed at Winter Concert 2022. 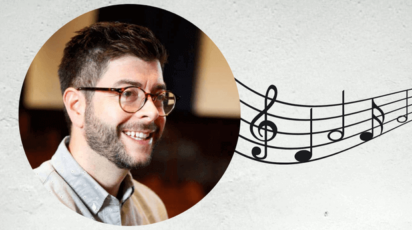 It's music to our ears. Dan Doughty is Poly's 2022 Spirit Award winner. 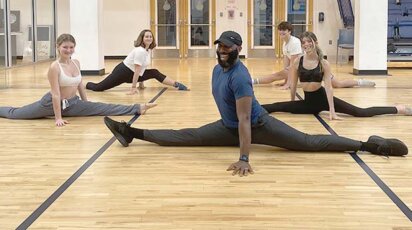 Pirouettes and Philosophy with the New Dance Teacher

Trying something new can shift one's perspective beyond expectations.