Twenty-five members of The Polygon staff were so eager to plan story ideas for the upcoming academic year that they came together for a full-day Journalism Conference on a hot day in late August.

Journalism teacher Rachael Allen organized the conference, which began with bagels in the student Communications space and a planning session run by Co-Editors-in-Chief Maerose Daniels ’23 and Selah Ilunga-Reed ’23.

Allen said her goals for the day were “to create a space for the Polygon editors to brainstorm story ideas, learn new journalism skills, and bond with each other. Once the school year begins, everything gets busy very quickly. It’s hard to find time for all of the editors to not only gather together, but also to explore big story ideas rather than racing to report on and produce stories for the latest edition. I hoped the conference would provide that space, allowing students to think big and feel inspired by the journalists who visited.”

“I was so pleased that almost every single editor on The Polygon came as well as some staff writers!” Allen added. “We had a range of students from a seventh grader to seniors, a strong indication of how journalism at Poly reached across grades and divisions.”

The Tenets of Journalism: Covering Reporting and Writing Basics

The editors went over the writing process for any new staff members. They broke into pairs to practice editing an article that had been written, but not published last year. The staff discussed how to conduct interviews and whether or not to record an interview. Reporters expressed an interest in doing more investigative pieces this year and pitched ideas for the September/October issue of The Polygon. Allen handed out Polygon bags with essentials such as reporter’s notebooks. Michael Gabriel ’24, the paper’s head cartoonist, designed a Polygon logo that is imprinted on the totes and Polygon stickers that will be given out.

The students broke into smaller groups. Some explored the Poly Archives in a third floor room of Alumni House and in the Joseph Dana Allen Library. In one tight archival space with high shelves, students carefully selected and paged through Polyglot yearbooks that became a window into Poly’s history. In the library, students read handwritten notes and records, some about fraternities in the 1930s, and found programs and tickets from a long ago production of A Midsummer Night’s Dream. Seeds of story ideas were born as the reporters discovered their school’s history.

Polygon layout editor Danielle Jason ’24 said,  “I think the coolest thing I found in the archives were all of the cartoons that I found throughout older editions of The Polygon. The thing that surprised me the most about these older editions is the fact that students used to have to pay for them (10 cents each), and that various companies would pay for sections in the newspapers promoting their businesses.”

Other students went to the Basso Conference Room to prep for a news conference and interview session with Head of Upper School Sarah Bates. During the session, reporters questioned Bates about AP courses and the new Upper School curriculum, among other topics. Afterward, Ilunga-Reed said about the press conference, “It gave a lot of insight into the inner workings of the school as we go into a new year, and also provided material for story ideas in the future.” She added, “The Polygon’s role is vital at Poly. We are committed to publishing as many perspectives from within the community as possible, while of course reporting in a truthful and responsible manner. We feel an obligation to illuminate different goings on within and without the school to the Poly community.”

Getting out onto the campus, students also took part in a scavenger hunt that had them follow clues to five locations.

After lunch, all of The Polygon staff moved to “the Joey” downstairs for an in-person session with investigative reporter Justin Elliott, who has worked for the nonprofit ProPublica for 10 years. In preparation, the students had read Elliott’s story, “Meet the Customer Service Reps for Disney and Airbnb Who Have to Pay to Talk to You.” Elliott said that journalism is “a trade you learn by doing” and he advised the students to “consume a lot of journalism” and consider what sources the writers used to get their story. He said that sources could be people or documents/digital sources. Elliott shared with students tools he uses to find information about nonprofits such as Nonprofit Explorer.

Elliott’s presentation was the highlight of the conference for staff writer Kyle Williams ’23. “He opened my eyes to entirely new sources of data, which should hopefully allow me to write some awesome articles,” Williams said.

In a virtual session, our Polygon reporters were able to learn how New York Times Metro reporter Lola Fadulu found a unique way to report on the aftermath of the Buffalo grocery store shooting massacre in May by interviewing more than two dozen children and their guardians. She related how she took the initiative to fly to Buffalo to interview people in person and stayed there for 10 days. Poly reporters asked how she found the people she interviewed. She stressed the importance of getting to know people she interviewed, establishing a relationship, and being empathetic.

Fadulu told the students that she loves her work meeting new people and the impact that she can have in her day-to-day work.

Sadie Schonberger ’25 asked how to “get information from people who do not want to give it.” Fadulu responded that she would try to make the person understand what the story was about and that “fairness is important to me.” The staff discussed with Fadulu speaking “on background” with a story interviewee and how to move to getting permission to quote the person for the story.

A student asked about how to get a unique angle on a news story. Fadulu advised them to “be aware of what is written on your beat” so as not to duplicate other work.

Allen asked Fadulu, who is a general assignment reporter, but who covers education in NYC, for “tips for reporting on education.” Fadulu advised, “Figure out the key players.” Then students shared with her some story ideas they were considering.

Layout editor Jason said the meeting with Fadulu was the highlight for her. “I feel like I learned a lot about how to turn journalism and writing into a career, as well as how to center education and school more in story ideas.”

Jason added, “I think other students and parents should know that The Polygon is always looking for new voices and perspectives to write in our stories and the entire Polygon staff is very welcoming of every writer, no matter how confident they are in their writing skills.”

The Coming Year in Poly Journalism

“My hope is for The Polygon to continue to be a professional, well-reported outlet for Poly news,” Allen said. “This year, in addition to our monthly print and online publication, the students are planning to explore multimedia journalism with data journalism, podcasting, and broadcast journalism — check out The Morning Devil, our student-run TV news program, and listen for Blue Devil Briefing on Monday mornings on the intercom system. While I am always there to advise the students, a key part of the Polygon is the students’ editorial independence. They have studied and practiced the principles of ethical journalism; as the paper’s editorial policy states, the students are the ones charged with making editorial decisions. I’ve been so pleased to watch them grow into this role over the past year and I’m looking forward to this upcoming year with them as their leadership and journalism skills only further develop to the benefit of the Poly community.” 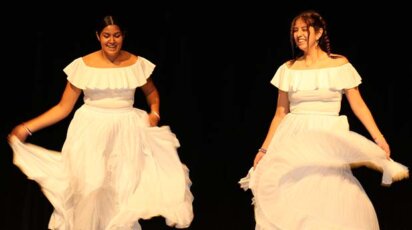 Led by Unidad, Poly celebrated the music of Hispanic and Latine cultures at assembly. 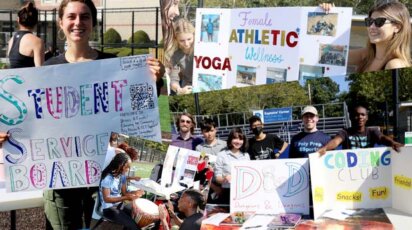 It was a smörgåsbord of opportunities at the Upper School Clubs Fair! 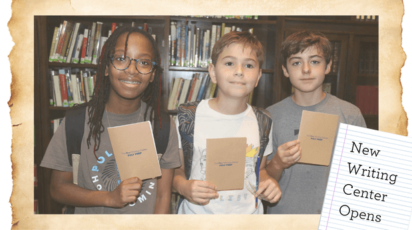