Poly’s Computer and Information Science Department faculty have made a significant impact on their students’ lives and academic careers that extends into their college and professional careers. Several alumni have shared how their Poly computer science courses and teachers were an important factor in their success in college and beyond.

Poly Prepared Her Well for MIT and Professional Pursuits

Sonja Lindberg ’16 majored in computer science at MIT. At Poly, she took an independent study class on the basics of computer science. “Poly prepared me well for CS at MIT in terms of managing a busy schedule and more importantly,” she said, “making me feel very comfortable with reaching out to professors and asking questions to actively engage in the learning process. I also found that the intense intellectual curiosity that Poly nurtured came into play, when I saw parallels between the fun I had turning a problem into an algorithm and my love of decoding the puzzles of metaphors and allegory of Chronicles of a Death Foretold in Emily Gardiner’s sophomore English class and King Lear in AP Literature with John Rearick.”

“After exploring software and data focused internships and classes,” Lindberg continued, “I found myself most interested in computer science as a language and universally applicable tool. I now use my background in tech at MIT alongside the strong logical thinking and communication skills, which Poly helped me develop, in my role as a management consultant in the digital practice at McKinsey & Company to help build products, transform major organizations, and help companies around the world develop their digital strategy. Although I don’t yet know what the future holds, I have also long had a passion for using the intersection of tech and strong business principles to improve the world around me, and am making good use of my work at McKinsey to grow and learn on the angle.”

“I am very excited to see computer science being prioritized as a fundamental skill in both secondary and higher education, as digital literacy has become table stakes, even more so during the global pandemic.”

Lindberg returned to Poly in fall 2018 to lead a workshop at Women in Science and Engineering (W.I.S.E.), our day of STEM workshops for young women founded by former faculty member Fleurette Turkenkopf and Upper School Dean Jamie Nestor. W.I.S.E. served to introduce and inspire New York City middle and high school girls to consider science and engineering as career options. Run exclusively by women, the girls who participated were able to see themselves in the program’s leaders and were empowered with the confidence to pursue higher education in STEM and understand a wide range of career opportunities to consider. Inspiring girls to participate in and pursue technology is one of the department’s priorities.

From Tech Crew to Science Olympiad to RPI

One might not immediately associate computer science with Poly’s theater program. But the two converged for James Decker ’18 who was a vital part of the tech crew for assemblies and the lighting crew for theater performances. He also led the Upper School Science Olympiad team and went to state championships with a robotic arm that he built.

After graduating, Decker went to Rensselaer Polytechnic Institute (RPI) and declared his major as computer science. “I ended up minoring in economics and management as well,” he said “I graduated a few months ago, in December [2021].” He currently works for Hyannis Port Research, which is a financial technology company that does risk checking for high frequency trading.

“At Poly,” Decker said, “my teachers were always willing to help me complete independent studies. Mr. [Charles] Polizano helped me with several independent projects, including my Senior Plan on the ethics of algorithms. Additionally, Ms. [Carolyn] Licata helped me study linear algebra my senior year, which proved very useful for my college CS [Computer Science] classes.”

“Just thinking like a computer scientist is valuable in prototyping.”

Akil Foster ’20  attends college at The Cooper Union for the Advancement of Science and Art where he is studying mechanical engineering and minoring in bioengineering. “Although I am not majoring in computer science,” Foster said, “I am required to know how to program using C++, Java, and Python when using arduinos, physics problems, and other problem solving. Taking AP Computer Science was extremely helpful because it gave me an understanding of digital logic design, which is an important course at my school, and it gave me a foundation on being good with computers.” He added, “Having a background in computer science is invaluable at an engineering school because there is always an opportunity to use computers to efficiently solve problems. Just thinking like a computer scientist is valuable in prototyping.”

Problem-Solving at Poly Was Foundation for CS at Yale

Sarah Skoler ’20 is currently studying math and computer science at Yale University. “I think that a lot of my work includes debugging, solving problems, and working with my classmates and peers,” she said, “and I think that Poly really prepared me for that. My senior year class at Poly was really about working in teams and trying to figure out problems with my code through debugging and getting help from peers and teachers. I hope to work in a field that combines math and computer science. I’m not entirely certain what exactly that could look like but I am thinking it will be something that is more of the mathematical aspect of programming.”

“The Computer Science Department was by far my favorite,” said Sam Collier ’21, who is  currently in his first year at Abertay University “in Scotland’s sunniest city, Dundee.” “The course I’m on,” said Collier, “is called Computer Games Technology. It’s a very specific four-year degree, which goes in depth on how to create the tools necessary to make and render video games.”

Collier had Mr. [Ben] Farrar and Mr. Polizano as teachers in Upper School at Poly. “They were both phenomenal teachers and were always supportive, encouraging, and most importantly communicative whenever I wanted to exceed the base requirements of an assignment in order to propel my understanding of programming further,” he said.

“If you have a passion for computer science or coding, don’t hesitate to ask how you can get even more out of an assignment.”

“If you have a passion for computer science or coding, don’t hesitate to ask how you can get even more out of an assignment. There’s always millions of ways to blow expectations out of the water. You may as well go ambitious while you’re still in a learning environment.”

In the future, Collier says, “I am hoping to work on interesting and ambitious video games after I get my degree. At the moment I’m interested in graphics programming. I’d be responsible for efficiently simulating visuals such as light and other physical phenomena while also keeping the frame-rate of the game consistent and high.” 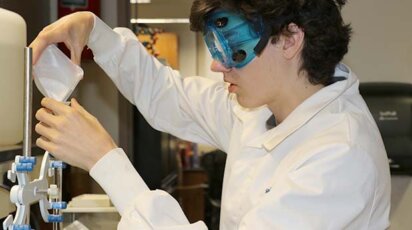 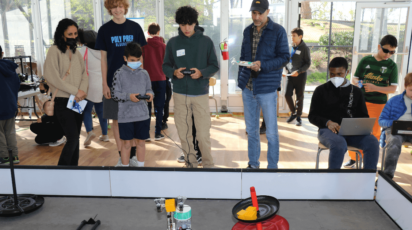 Drones, robots, and more! Families had a blast at Afternoon of Tech.